The West Virginia Intercollegiate Athletic Conference (WVIAC) was a collegiate athletic conference which historically operated exclusively in the state of West Virginia, but expanded into Pennsylvania in its final years. It participated in the NCAA's Division II, but held its final athletic competitions in spring 2013, and officially disbanded on September 1 of that year. Its football-playing members announced in June 2012 that they planned to withdraw to form a new Division II conference effective at the end of the 2012–13 season; this led to a chain of conference moves that saw all but one of the WVIAC's members find new conference homes.

The conference was rated as one of the oldest in intercollegiate athletics, dating back to its founding in 1924 by the West Virginia Department of Education.

The WVIAC moved into the NCAA Division II in 1994 after its long affiliation with the NAIA.

Its post-season basketball tournament, which was first conducted in 1936, was at the time of the conference's demise one of the oldest college post-season tournaments in continuous existence—only the Southern Conference Men's Basketball Tournament, established in 1922, was older.

On June 18, 2012, nine football-playing members of the WVIAC announced they would withdraw from the league to form a new regional all-sports conference.[1] 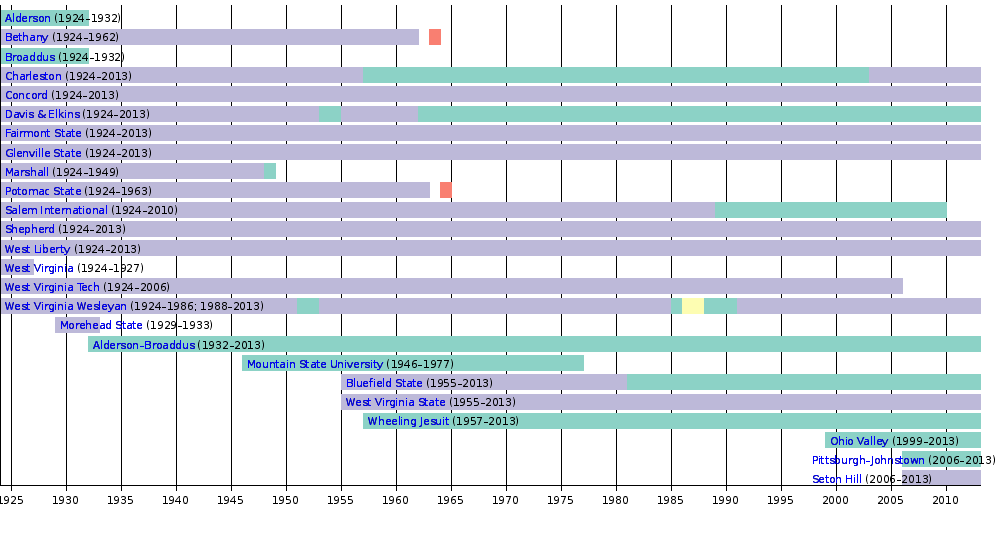 Retrieved from "https://americanfootballdatabase.fandom.com/wiki/West_Virginia_Intercollegiate_Athletic_Conference?oldid=191861"
Community content is available under CC-BY-SA unless otherwise noted.