The Washington Redskins Cheerleaders were second only to the Pittsburgh Steelers in professional NFL cheerleaders (1961; the Rooneys eliminated them shortly afterwards), but continue to be the longest running professional National Football League cheerleading organization.[1]

Originally called the Redskinettes, they have cheered for the Washington Redskins since September 30, 1962. The first director of Redskinettes was Doris Snyder. Initially she had the cheerleaders perform in native-themed (though not authentic) costumes, but subsequently changed to outfits similar to other NFL cheerleading organizations, without any native theme.

In addition to touring with the football team, they have also performed around the world. In 1982, they were invited to be the first NFL cheerleaders to perform in Asia promoting U.S. commercial products throughout Taiwan. In 1983 the cheerleaders produced their first calendar, which they have continued since. In 1984, they were the 4th NFL squad to perform in a United Service Organizations (USO) tour entertaining the armed forces in Turkey, Italy, Sicily, Spain and the 6th Fleet off the coast of France. Since then, they have participated in numerous Department of Defense (DOD) tours to entertain U.S. servicemen and women. DOD tours have included Egypt in 2000, Guantánamo Bay, Cuba in 2001, Kosovo in 2002, and others for a total of over 35 countries. In December 3-17 of 2005, they completed their 20th overseas tour for the USO, entertaining U.S. troops in East Asia. 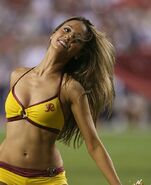 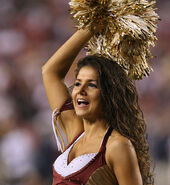 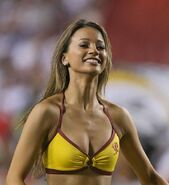 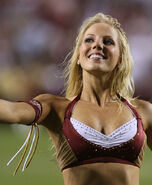 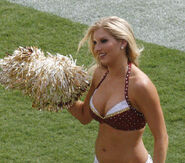