Timeline of the National Football League

This timeline of the National Football League tracks franchises from the early days of the league, through merger with the AFL. The history of franchises that began as independent teams, or as members of the Ohio League, New York Pro Football League, and other defunct leagues are shown as well. 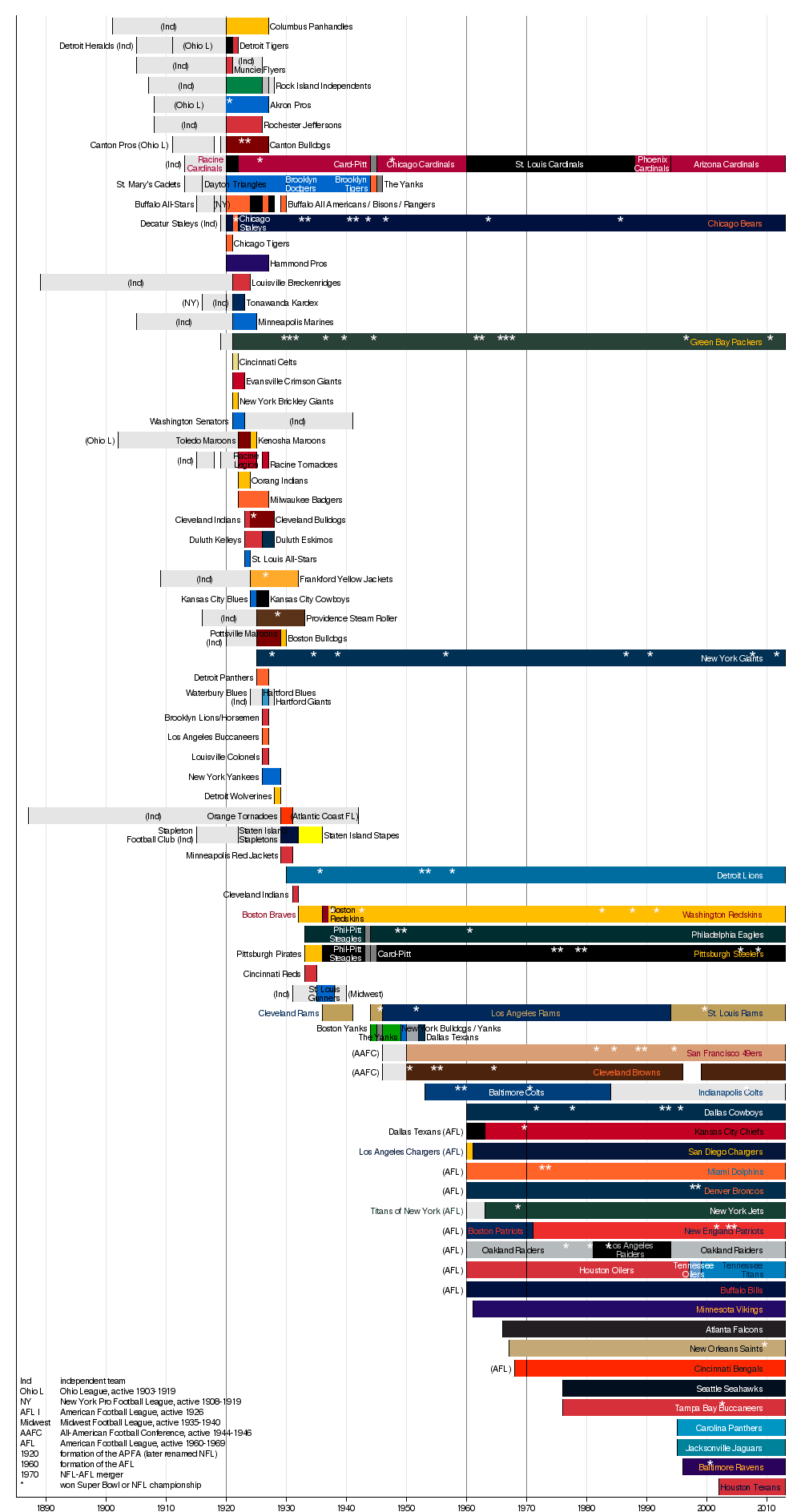 The American Professional Football Association is formed. The fourteen teams were mainly drawn from the Ohio League or the New York Pro Football League. A $100 membership fee was charged. The Chicago Tigers folded after season.[1]

Number of teams increased to 21. Four teams lasted only one season. Three other franchises folded.

A new and distinct Cleveland Indians franchise was formed. Two other teams joined the NFL, the Duluth Kelleys and the St. Louis All Stars. The St. Louis team folded after one season.

The Canton Bulldogs were reactivated. Four other franchises were awarded. This was the final season for the Rochester Jeffersons.

The league grew to 22 teams, a figure that would not be equaled in professional football until 1961, adding the Brooklyn Lions, the Hartford Blues, the Los Angeles Buccaneers, and the Louisville Colonels, with Racine Tornadoes re-entering.

Prior to the season, the league decided to eliminate the financially weaker teams. As a result, the league dropped from 22 to 12 teams, and a majority of the remaining teams were centered around the East Coast instead of the Midwest, where the NFL had started. The New York Yankees were added from the American Football League and the Cleveland Bulldogs returned.

The NFL drops to ten teams. Two teams had folded, the Buffalo Bisons sat out the season and the Cleveland Bulldogs moved and played as the Detroit Wolverines.

The league increased back to 12 teams with the addition of two franchises, the Staten Island Stapletons, and the Orange Tornadoes. Two mothballed teams activated for the season. Minneapolis re-entered as the Red Jackets and the re-entry of the Buffalo Bisons.

Prior to the season, Brooklyn businessmen William B. Dwyer and John C. Depler bought the Dayton Triangles, moved it, and renamed it the Brooklyn Dodgers. The Orange Tornadoes relocated to Newark. The Portsmouth Spartans entered as a new team.

The league decreased to 10 teams due to financial hardships caused by the Great Depression. While the Cleveland Indians joined as an expansion team, the league lost the Minneapolis Red Jackets and the Newark Tornadoes. Even the Frankford Yellow Jackets had to fold midway through the season.

History of the National Football League