American Football Database
Register
Don't have an account?
Sign In
Advertisement
in: Pages using Timeline, Official website different in Wikidata and Wikipedia, Organizations based in Texas,
and 3 more

View source
watch 01:54
Obi-Wan Finale - The Loop
Do you like this video?
Play Sound

The Southland Conference is a college athletic conference which operates in the south central United States (specifically Texas, Oklahoma, Louisiana, and Arkansas). It participates in the NCAA's Division I for all sports; for football, it participates in the Division I Football Championship Subdivision (FCS). The Southland sponsors 17 sports, nine for women and eight for men, and is governed by a presidential Board of Directors and an Advisory Council of athletic and academic administrators. Tom Burnett was named the Southland's sixth commissioner on Dec. 23, 2002.

The conference's offices are located in the Dallas suburb of Frisco, Texas.

Founded in 1963, its members were Abilene Christian College (now Abilene Christian University; departed 1973 for NCAA Division II, but will move to Division I and rejoin the Southland effective 2013), Arkansas State College (now Arkansas State University; departed 1987, now a member of the Sun Belt Conference), Arlington State College (now The University of Texas at Arlington, which joined the Western Athletic Conference in 2012 and will move to the Sun Belt in 2013), Lamar State College of Technology (now Lamar University, left in 1987 and re-joined in 1999; the only founding school that is currently a member), and Trinity University (departed 1971, now participating in NCAA Division III).

Since its founding, the Southland Conference has been the home for 18 college and university all-sports programs (see membership timeline above). In addition, the conference has also been home to some schools for one sport only. In the case of football, Troy fielded a team from 1996–2000 and Jacksonville State from 1997-2002. This has also been the case for some Olympic sports like men's tennis, in which the University of Texas-Pan American and the University of New Orleans currently field teams as affiliate members.

* - Lamar re-joined the Southland Conference after competing in different conferences between the 1987-88 and 1998-99 seasons.

Houston Baptist has announced it will have a football team ready to start play in 2014 and will join the conference July 1, 2013, in all Southland-sponsored sports.[3] On August 20, 2012, the Southland Conference announced that the University of the Incarnate Word will become a member of the league, effective July 1, 2013.[4] Incarnate Word will begin the four-year shift to Division I with the Southland Conference’s assistance and oversight. It is expected that UIW will begin counting as an NCAA Division I team for scheduling purposes in 2014-2015 and will be fully eligible for NCAA championship events in 2017-2018. On August 23, 2012, the University of New Orleans (UNO) announced that it would be joining the Southland Conference, effective the 2013-2014 academic year, after being an independent since 2010.[5] In 2012 Southland issued an invitation to the Abilene Christian University Wildcats, charter members as Abilene Christian College, to rejoin the Conference after an absence of four decades.[6] (on August 21 the Times-Picayune reported that the University of New Orleans "would become the Southland's 14th member, joining Incarnate Word and Abilene Christian").[7] The invitation was officially accepted by the Board of Trustees of Abilene Christian on August 25.[8] 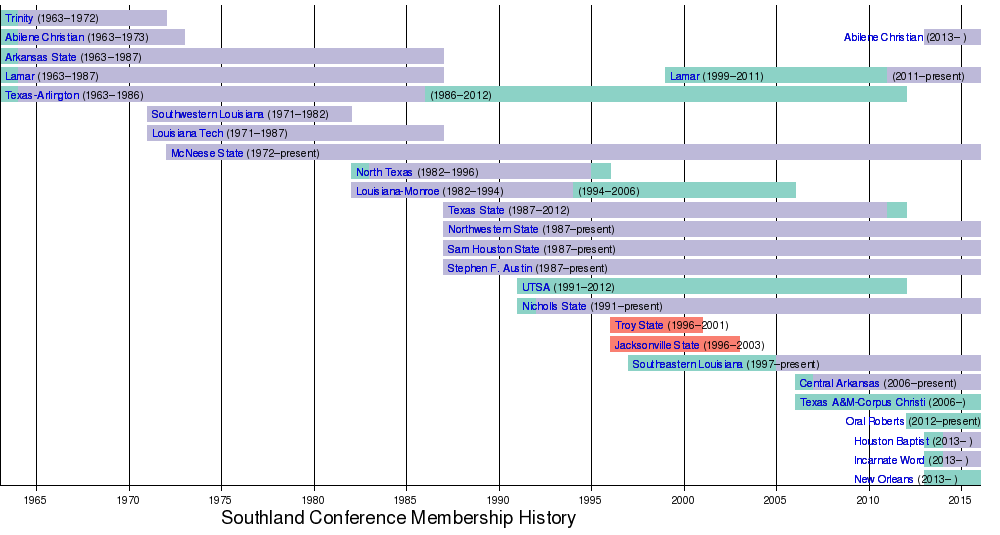 The Southland was instrumental in founding the Independence Bowl, and the Southland champion served as the automatic home team for that bowl from 1976–1980.[10]

The Conference began its own broadcast entity in 2008, the Southland Conference Television Network. It airs in over 20 markets in the league's four-state region, plus on national networks such as Fox College Sports, and ESPN FullCourt and ESPN3. In 2008-09, the Network featured 35 broadcasts, then followed with 31 live events in 2009-10 and 31 in 2010-11. The schedule includes regular season football games, regular season and tournament basketball, and the championships in women's soccer and women's volleyball.

Some events are carried exclusively by ESPN3, including the 2012 softball and baseball championships.