The Southern Intercollegiate Athletic Association (SIAA) was one of the first collegiate athletic conferences in the United States. Twenty-seven of the current Division I FBS (formerly Division I-A) football programs were members of this conference at some point, as were at least 19 other schools. Every member of the current Southeastern Conference except Arkansas and Missouri, as well as six of the 12 current members of the Atlantic Coast Conference plus the University of Texas, now of the Big 12 Conference (and previously of the now defunct Southwest Conference), formerly held membership in the SIAA.

The SIAA was founded on December 21, 1894, by Dr. William Dudley, a chemistry professor at Vanderbilt.[1] The original members were Alabama, Auburn, Georgia, Georgia Tech, North Carolina, Sewanee, and Vanderbilt. Clemson, Cumberland, Kentucky, LSU, Mercer, Mississippi, Mississippi A&M (Mississippi State), Southwestern Presbyterian University, Tennessee, Texas, Tulane, and the University of Nashville joined the following year in 1895 as invited charter members.[2] The conference was originally formed for "the development and purification of college athletics throughout the South".[3] They crafted a constitution, created an Executive Committee, elected officers, and set rules for[3]:

The league did not, however, sponsor much in the way of championship competition for its member schools. It did hold an annual track and field competition for a trophy, and it also held some basketball tournaments over the years, but apparently some member schools did not compete in the tournament during some years, and sometimes non-member southern schools were even allowed to compete in it as well. In 1903, a single-game football playoff occurred, but it seems to have been coordinated more so by the two competing schools (Clemson and Cumberland) than the conference itself. Several other efforts over the years by individual schools (rather than by the SIAA) to hold a conference title game fell through. Most SIAA titles claimed by schools in various sports were actually more mythical in nature than officially sanctioned by the league. Indeed, some schools centrally-located in the conference played far more conference games than others on the periphery, making it difficult to form a fair comparison to determine just which team was truly the best, especially once the league began to constantly expand its membership.

In 1915, a disagreement arose within the conference regarding the eligibility of freshman athletes, the so-called "one-year rule." Generally, the larger universities opposed the eligibility of freshman players, while the smaller schools favored it. As a result, some of the large universities formed the Southern Intercollegiate Conference (now the Southern Conference), which used the one-year rule, while still maintaining membership within the SIAA.[4]

At the conference's annual meeting on December 10, 1920, the SIAA rejected proposals to ban freshman athletes and abolish paid summer baseball.[5] In protest, some schools that had voted in favor of the propositions immediately announced they would seek to form a new conference.[5] On February 25, 1921, Alabama, Auburn, Clemson, Georgia, Georgia Tech, Kentucky, Mississippi State, and Tennessee left the SIAA to form the Southern Conference, along with non-SIAA members Maryland, North Carolina, North Carolina State, Virginia, Virginia Tech, and Washington & Lee.[6] In 1922, the Southern Conference underwent an expansion and added six more members, all at the expense of the SIAA: Florida, Louisiana State, Mississippi, South Carolina, Tulane, and Vanderbilt.[4]

With the departure of most of the major colleges, the SIAA became a de facto small college conference in 1923. In the 1920s and 1930s, the SIAA increased its membership with the addition of many additional small universities. The conference eventually disbanded in 1942 with the onset of American involvement in World War II.[4] League archives were kept at Vanderbilt, the league's founding school, but the building housing the archives was eventually gutted with fire, taking countless irreplaceable items pertaining to the SIAA's history with it. 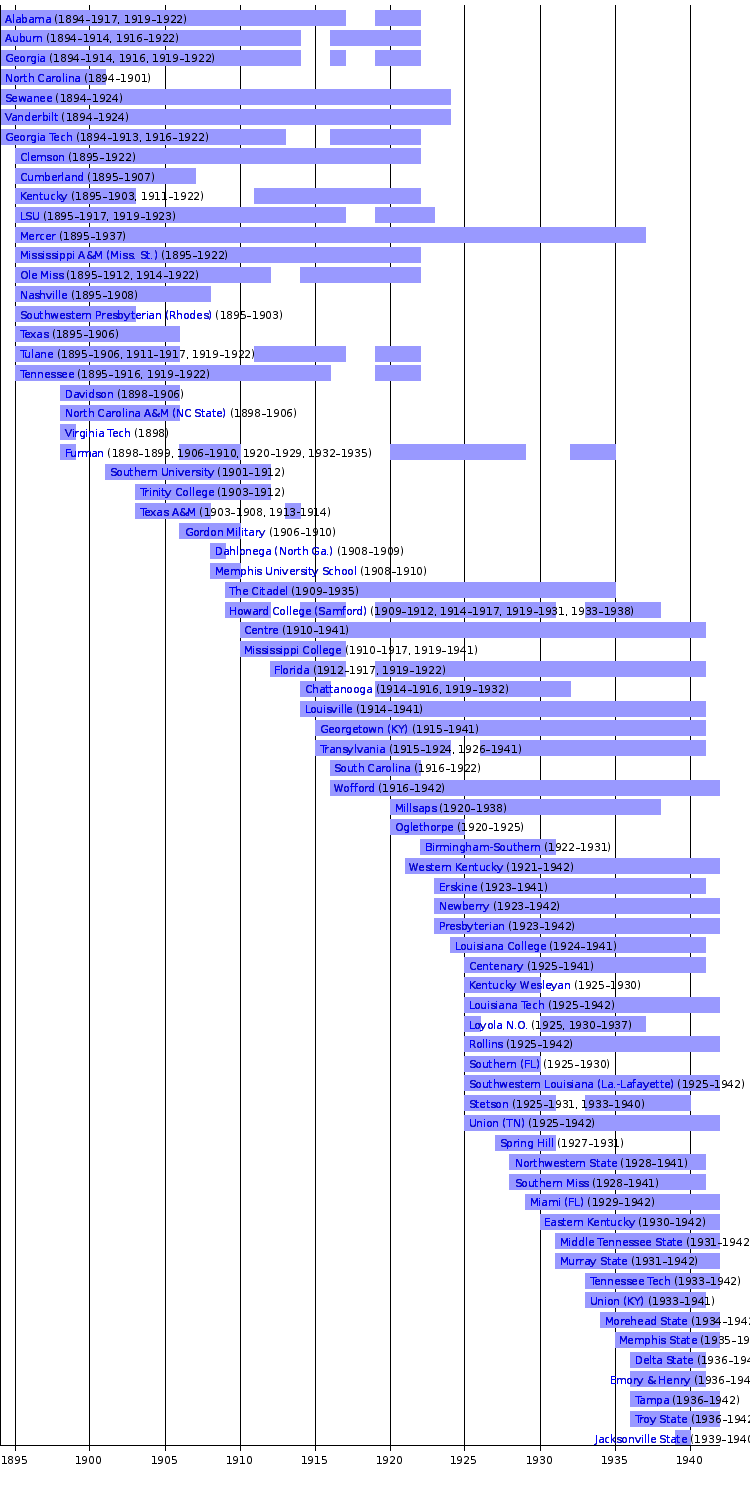 Retrieved from "https://americanfootballdatabase.fandom.com/wiki/Southern_Intercollegiate_Athletic_Association?oldid=132589"
Community content is available under CC-BY-SA unless otherwise noted.