The Sooner Athletic Conference (SAC) is a small college athletics conference affiliated with the National Association of Intercollegiate Athletics (NAIA). Originally developed as a five-team conference of Oklahoma-based schools, the SAC now boasts 12 schools in a league that spans four states – Oklahoma, Texas, Arkansas and Kansas.

As of December 2017, SAC member institutions have collected 102 National Association of Intercollegiate Athletics (NAIA) team championships – the most among NAIA conferences – since the league formed in 1978.

Throughout the league's 39-year history, the SAC continues to be known as the conference "Where Champions Play". Various institutions have competed under the SAC banner over the years. Today only the University of Science and Arts of Oklahoma remains from the original group that was formed when Bethany Nazarene (now Southern Nazarene), Oklahoma Baptist, Oklahoma Christian and Phillips University withdrew from the Texoma Conference to form the SAC. 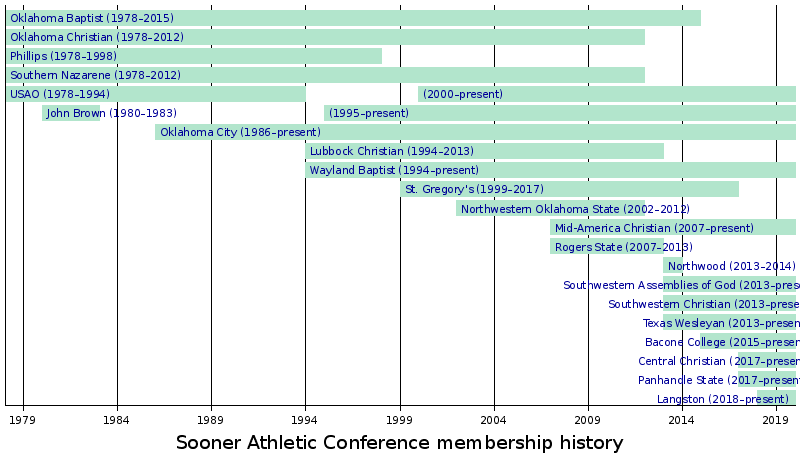 Retrieved from "https://americanfootballdatabase.fandom.com/wiki/Sooner_Athletic_Conference?oldid=208287"
Community content is available under CC-BY-SA unless otherwise noted.