Samuel Benjamin Watkins IV (born June 14, 1993) is an American football wide receiver for the Kansas City Chiefs of the National Football League (NFL). He played college football at Clemson and was drafted by the Buffalo Bills fourth overall in the 2014 NFL Draft. He has also played for the Los Angeles Rams.

Watkins attended South Fort Myers High School in Fort Myers, Florida, where he was a letterman in football, basketball and track & field.[1] He became the all-time leading receiver in the history of Lee County with 133 catches for 2,997 yards and 36 touchdowns during his career. In his junior and senior years, he was a first-team all-state selection. As a sophomore, he had 33 receptions for 537 yards and 10 scores. In his junior year, he added 46 catches for 1,192 yards and 14 touchdowns. As a senior, Watkins had eight 100-yard receiving games on the season, accumulating totals of 54 catches for 1,268 yards and 12 touchdowns. He led an undefeated South Fort Myers team into the 3A state semifinals, where they lost 44–28 to a Duke Johnson-led Miami Norland team.[2] He played in the 2011 U.S. Army All-American Bowl.

In addition to football, Watkins ran track & field for the Wolfpack, where he was one of the state's top performers in the sprinting events. As a junior, he finished fifth in the 100 meters and sixth in the 200 meters at the state meet. As a senior, he captured the AA state title in the 200 meters, with a PR of 21.11 seconds.[3] He also won the 100 meters at the 2011 Tarpon Invitational, recording a personal-best time of 10.45 seconds.[4]

Watkins was a highly touted recruit before the 2011 college football season.[5] Regarded as a five-star recruit by Rivals.com, he was rated the third-best wide receiver prospect in the nation, behind only George Farmer and Trey Metoyer.[6] He was ranked fifth best by Scout.com.[7] Watkins committed to Clemson University in November 2010.[8] Recruited by dozens of schools, he chose Clemson over offers from Florida, Florida State, Miami (FL), Michigan, and Tennessee.[9]

Despite not taking part in spring practice, Watkins made an immediate impact for Clemson in his freshman season in 2011.[9] He caught 82 passes for 1219 yards and 12 touchdowns in his first collegial season, including 10 catches, 155 yards and two touchdowns against the defending national champion Auburn Tigers.[10] He led the nation in reception yards per game, all-purpose yards and touchdowns.[11] He also broke 11 school freshman records seven games into the season, including total all-purpose yards previously held by C. J. Spiller.[11] He was an AP first-team All-American, becoming only the fourth ever true freshman to do so, joining Herschel Walker, Marshall Faulk and Adrian Peterson.[12] He was also named a Freshman All-American by the Football Writers Association of America.[13]

In January 2014, Watkins announced that he would forgo his senior season and enter the 2014 NFL Draft.[18]

Watkins was drafted by the Buffalo Bills in the first round as the fourth overall pick in the 2014 NFL Draft.[20] Cleveland traded this selection to Buffalo in exchange for Buffalo's 2014 first round selection (the 9th pick, later traded by Cleveland to Minnesota, who used it to select UCLA linebacker Anthony Barr), and their first and fourth round selections in 2015 (19th Cameron Erving C & 115th Ibraheim Campbell S)[21] He was the first wide receiver selected by the Bills in the first round since Lee Evans in 2004, and the earliest wide receiver selected in the draft since A. J. Green in 2011.[22]

On May 28, 2014, Watkins signed his rookie contract, a fully guaranteed four-year deal worth $19.94 million, with a $12.8 million signing bonus.[23] He caught his first career touchdown reception from EJ Manuel in a Week 2 29-10 victory over the Miami Dolphins. In Week 7 against the Minnesota Vikings, Watkins caught nine passes for 122 yards for two touchdowns. His second touchdown was the game winner coming with one second remaining in the game.

Through the first five games of the 2015 season, Watkins (who played in only three of the games because of a calf injury) had just seven catches for 99 yards. He voiced his frustration before game 6, saying "You came up to draft me and I’m not getting targets — that’s a problem. You’re making me look bad and you’re making yourself look bad. Why not make both of us look good?"[25]

On October 27, 2015, frustrated with his social media followers for leaving angry comments about him missing three games due to injury, Watkins took to his Instagram and lashed out at critical fans. In a comment which Watkins later deleted, he told the fans to "get a life and go to work" and "continue working y'all little jobs for the rest of y'all lives".[26] This caused an uproar with many Bills fans.[27] Watkins followed up, with a clarification posted on Twitter stating, “Message wasn’t for fans (but) for whomever have a problem with athletes being injured.”[28] Watkins later posted another Instagram photo addressing the situation, saying his comments were "inappropriate" and acknowledged that a majority of the negative comments were from other fans and not Bills fans.[29]

Playing on an injured ankle that had kept him out of a Friday practice, Watkins had a career-high 168 receiving yards on eight catches with one touchdown in a Week 9 33–17 victory over the Miami Dolphins.[30]

On May 16, 2016, it was reported that Watkins had broken a small bone in his foot. Watkins had a screw inserted in his foot, and the Buffalo Bills medical staff was hopeful that would be ready for training camp.[32] On September 30, 2016, he was placed on injured reserve.[33] He was activated off injured reserve on November 26, 2016 prior to Week 12.[34]

On May 2, 2017, the Buffalo Bills declined Watkins' fifth-year option, essentially making him a free agent after the 2017 season.[35]

On September 10, 2017, in the season opener against the Indianapolis Colts, Watkins had five receptions for 58 yards in his Rams debut in the 46–9 victory.[37] Watkins recorded his first touchdown of the season with 106 yards against the San Francisco 49ers in Week 3 with a stunning catch for the Rams 41–39 victory.[38] In Week 9, Watkins caught a season-long 67-yard reception from Jared Goff that resulted in a touchdown as part of the 51–17 blowout win by the Rams over the New York Giants.[39] Overall, he finished the 2017 season with 39 receptions for 593 receiving yards and eight receiving touchdowns.[40]

In a pre-draft interview, Watkins said that his favorite football team, as a child, was the Buffalo Bills.[50] In May 2012, Watkins was arrested by Clemson campus police for possession of marijuana. He was also found to have one pill each of Vyvanse and Adderall and charged with possession of a controlled substance. As a result, Watkins was suspended for the first two games of the 2012−2013 season.[51] Watkins completed pre-trial intervention and had the charge expunged from his record.

His older half brother, Jaylen Watkins, is a defensive back for the Los Angeles Chargers. Both Sammy and Jaylen were selected in the 2014 NFL Draft, 97 picks apart. He has three daughters, Samiah, Saliah and Azaria from two different mothers.[52] 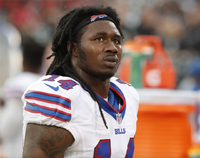 Add a photo to this gallery

Retrieved from "https://americanfootballdatabase.fandom.com/wiki/Sammy_Watkins_(American_football)?oldid=268317"
Community content is available under CC-BY-SA unless otherwise noted.