The Rocky Mountain Thunder was an indoor football team in the Indoor Professional Football League (IPFL) during the 1999 season. The Thunder was owned by Scott D. Riddell and played their home games at the World Arena in Colorado Springs, Colorado. The team's official colors were: Royal Blue, Silver and Black. The head coach for the Thunder was Collins Sanders, who also served as head coach for the 1998 PIFL Colorado Wildcats and currently is head coach/director of football operations for the Colorado Ice of the UIF.

Headlined by former Denver Broncos wide receiver Mark Jackson, a member of John Elway's "Three Amigos" receiving corps, the Thunder had high hopes coming into the 1999 campaign. They won four out of their first five games, none by more than seven points, before a seven-game slide all but ended their playoff hopes and left them with a 5-11 record. The Thunder was later sold to Mark Jackson and moved to the magnus arena in Denver[1] 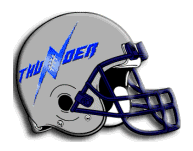 Retrieved from "https://americanfootballdatabase.fandom.com/wiki/Rocky_Mountain_Thunder?oldid=9757"
Community content is available under CC-BY-SA unless otherwise noted.