The Ravens–Steelers rivalry is a National Football League (NFL) rivalry between the Baltimore Ravens and the Pittsburgh Steelers. It is widely considered to be one of the greatest and most intense rivalries in the NFL.[1][2] Both teams are members of the American Football Conference North division (formerly the AFC Central). Since the Ravens' inception in 1996, they have played at least twice a year, often for divisional supremacy. Both teams are known for fielding tough, hard-hitting defensive squads, giving their games an extra element of physical intensity. Both teams have had a franchise quarterback whom have had successful rookie seasons; in Ben Roethlisberger and Joe Flacco, with Roethlisberger leading his Steelers to a near-perfect 15-1 record and Flacco nearly making Super Bowl XLIII, both in their rookie years.

The two teams have met in the postseason four times, with the Steelers owning a 3–1 advantage. They are the only two teams in the AFC North to have won the Super Bowl, and possess a combined 8–2 record in the game, with the Ravens being 2–0 and the Steelers being 6–2. Both teams have won two Super Bowls since the rivalry began.

In Baltimore, this rivalry has the added element of a small number of former Colts fans in the area becoming Steelers fans after the Colts moved, then retaining their affiliation with the Steelers after the Ravens began play in Baltimore as a division rival of the Steelers. In Pittsburgh, it is considered the spiritual successor to the Browns–Steelers rivalry due to the Browns' relocation to Baltimore, as well as the "reactivated" Browns' poor record against the Steelers since returning to the league in 1999.[3] Due to its physical nature, it has received comparisons to the Steelers' rivalry with the Oakland Raiders in the 1970s, when those two teams were among the most physical teams in the league.[4] Both teams have also handed each other their first loss in their current stadiums; the Steelers handed the Ravens their first loss at PSINet Stadium (now M&T Bank Stadium) in 1998, while the Ravens returned the favor by handing the Steelers their first loss at Heinz Field in 2001.

A notable battleground for the rivalry is the Harrisburg, Pennsylvania market area. Harrisburg is officially a secondary market for the Ravens, and so WHP-TV must show all Ravens Sunday afternoon away games. The Steelers also have a significant fan base in the area, so when the Ravens are at home, the Steelers are shown instead. The Harrisburg area also has a significant fan base for the Philadelphia Eagles, who also have Harrisburg as a secondary market (but are in the NFC, so the Fox affiliate usually shows the Eagles). The Colts had a number of fans in Harrisburg as well during their stay in Baltimore.

In 2005, Sports Illustrated ranked the rivalry #2 on a list of "Top 10 New NFL Rivalries".[5] By 2015, Bleacher Report had ranked it the #1 rivalry in all of the NFL.[6] One of the rivalry's most memorable moments was Ravens linebacker Terrell Suggs being quoted as saying that a "bounty" was put out on the head of Steelers wide receiver Hines Ward. The bounty controversy was cleared up when Suggs insisted his words were just meant as a joke. The NFL investigated, and Suggs was cleared of any wrongdoing.

In 1996, NFL football returned to Baltimore, 12 years after the original Baltimore Colts moved to Indianapolis. In a strange twist of fate, Art Modell, former owner of the Steelers' traditional rival, the Cleveland Browns, agreed to suspend the Browns franchise in return for taking his players and personnel to Baltimore, creating the Baltimore Ravens expansion franchise. The inter-divisional rivalry carried over with both teams remaining in what was then the AFC Central Division.

The Ravens and Steelers first met on September 8, 1996, at Three Rivers Stadium in Pittsburgh, Pennsylvania, which resulted in a 31–17 win for the Steelers. Later in the 1996 NFL season, on December 1, the Ravens beat the Steelers 31–17 at Memorial Stadium in Baltimore, Maryland. After splitting the games in their first season together, the Steelers would go on to mostly dominate the series in the early years, winning eight of eleven meetings (including a Divisional Playoff game) before the AFC Central was restructured into the AFC North in 2002. From 2002 to 2007, the rivals split their games 6–6, signaling a more competitive and fierce era for the rivalry.

The rivalry reached a new height of intensity during the 2008 NFL season, when the Ravens and Steelers played three times, the final match being the AFC Championship game. The Steelers won all three games by close margins. In Week 4 at Pittsburgh, the Steelers won on a 46–yard field goal in overtime. In Week 15 at Baltimore, the Steelers beat the Ravens with a controversial score late in the game, also winning the AFC North championship that game. In the playoff game, a personal foul by special teams player Daren Stone cost the Ravens 25 yards. The game's last score was an interception that was returned for a touchdown by Troy Polamalu, sealing a 23–14 victory for Pittsburgh. In that same game the Steelers' Ryan Clark delivered a concussion-inducing, but legal hit on the Ravens' Willis McGahee that left Clark briefly out cold and forced McGahee to spend the night in a Pittsburgh hospital. The Steelers went on to win Super Bowl XLIII against the Arizona Cardinals.

The bitter rivalry continued in the 2009 NFL season; the Ravens won 20–17 at M&T Bank Stadium and the Steelers won 23–20 at Heinz Field. Both the Ravens and the Steelers finished the season with 9–7 records, but Baltimore won a Wild Card slot over Pittsburgh due to a better division record. The Ravens won the Wild Card game by defeating the New England Patriots 33–14, but lost to the Indianapolis Colts the following game.

The Ravens and Steelers met three times again in the 2010 NFL season, with the Ravens winning the first game and the Steelers winning the last two, including the Divisional Playoff game. On the opening Sunday of the 2011 NFL season, the Ravens forced seven turnovers and routed the Steelers 35–7 at home.[8] During Week 9 of the season, the Steelers were on the verge of winning the rematch at Heinz Field. The Steelers were ready to potentially increase their lead with a 47–yard field goal kick by Shaun Suisham, but a 5–yard delay of game penalty put them out of field goal range and they instead decided to punt the ball to the Ravens. In the end, Ravens quarterback Joe Flacco threw a 26–yard touchdown pass to wide receiver Torrey Smith in the end zone with just eight seconds remaining, giving the Ravens the win and a season sweep of the Steelers. This would mark the last time Ravens linebacker Ray Lewis would play against the Steelers, as he was injured during the teams' two meetings in 2012 and retired following his win in Super Bowl XLVII.

In the 2012 NFL season, the Ravens and Steelers split their games; the road team won each meeting. The Ravens captured their second consecutive AFC North championship in 2012 and won Super Bowl XLVII against the San Francisco 49ers at the end of the season.

On Thanksgiving 2013, the Ravens defeated the Steelers 22–20 , preventing a last-minute 2–point conversion and forcing a split between the rivals for the season. The game included an infamous moment when Steelers head coach Mike Tomlin interfered on the sidelines on a Jacoby Jones kickoff return, eventually resulting in a $100,000 fine for Tomlin.

In Week 2 of the 2014 NFL season, the Ravens beat the Steelers 26–6 at M&T Bank Stadium, which marked the first time since 2011 that the Steelers did not score a touchdown in a game. In Week 9, the Steelers defeated the Ravens 43–23 at Heinz Field. Unlike the typical, close games of the rivalry, each team had beaten the other by 20 points at their respective home fields in the regular season. At halftime during the Week 9 game, the Steelers retired Jersey No. 75 in honor of defensive tackle Joe Greene, who had helped lead the legendary "Steel Curtain" defense of the 1970s. Though the Steelers went on to win the AFC North with an 11–5 record in the 2014 season, the 10–6 Ravens would earn their first playoff victory over their rival on January 3, 2015, with a 30–17 win at Heinz Field in the Wild Card round, in the game Ravens linebacker Terrell Suggs (who had public comments against Steelers Quarterback Ben Roethliesberger years before) caught a game sealing interception with his legs.[9]

In Week 9 of the 2016 NFL season, the 4–3 Steelers and 3–4 Ravens met at M&T Bank Stadium, each team having an opportunity to gain control of the AFC North. Behind a defense that shut out the Steelers for the first three quarters, the Ravens emerged victorious 21–14, taking the lead in the division and evening the teams' records at 4–4. In the rematch at Heinz Field on Christmas Day, the 9–5 Steelers prevailed over the 8–6 Ravens in a back-and-forth game, 31–27. With nine seconds remaining, Steelers receiver Antonio Brown scored the game's final points by reaching over the goal line in a play nicknamed the "Immaculate Extension."[citation needed] The win secured the AFC North championship for Pittsburgh and eliminated Baltimore from playoff contention.

The teams split their 2018 meetings, both winning on the road. In Week 4, The teams met in Pittsburgh for a Sunday Night Football showdown. The Ravens jumped out to a 14–0 lead in the first quarter, but following a Pittsburgh field goal and then a fumble by Ravens running back Alex Collins near the Steelers' goal line, the Steelers gained momentum and tied the game 14–14 at halftime. However, in the second half, the Ravens pulled away by kicking four field goals and shutting out the Steelers' offense, making the final score 26–14 in favor of Baltimore. In the rematch in Week 9, the Steelers defeated the Ravens 23–16, which included Joe Flacco's final start as a Raven (and final match between Ben Roethlisberger & Joe Flacco) due to an injury and later being benched in favor of rookie quarterback Lamar Jackson. In the final week of the season, the 9–6 Ravens hosted the Browns while the 8–6–1 Steelers hosted the Bengals. The Steelers needed a win and a Ravens loss to capture their third consecutive division championship, while the Ravens simply needed a win to clinch the AFC North. While the Steelers were able to get a 16–13 victory, the Ravens topped the Browns 26–24, which gave Baltimore their first AFC North championship since 2012. The games were also noted with Steelers players and fans staying to watch the end of the Ravens game (and eventual Ravens division clinching win) on the jumbotron at Heinz Field after the game.[10] 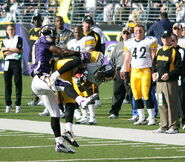