According to most NFL cheerleading sites, cheerleading is classified as a part-time job that consists of time for practice, training camp, games, appearances, photo shoots, and charity events.

Most often, cheerleaders have completed or are attending a university, and continue on to other careers after cheering for an average of one to four seasons.

Apart from their main duties of cheering during the football games, the cheerleaders have many other responsibilities. Nearly every team member is available for appearances at schools, events, conferences, etc., for a set fee. An anticipated annual event is the release of each squad's calendar, featuring members for each month in swimsuits, lingerie, or uniforms. As well as being a mainstay of American football culture, the cheerleaders are one of the biggest entertainment groups to regularly perform for the United States Armed Forces overseas. All performances and tours are enlisted by the USO. Teams send their variety show, an elite group of their best members, to perform combination shows of dance, music, baton twirling, acrobatics, gymnastics, and more. In February 2007, the Buffalo Bills even sent a squad of eight along with their choreographer into the war zone of Iraq. In 1996, the SF 49ers Cheerleaders and their director Angela King-Twitero helicoptered into the war inflicted country of Bosnia with the USO and the U.S. Army. The U.S. troops in Korea have been entertained during the holiday season with the USO's Bob Hope Tour. Over the years, the tour has featured NFL cheerleaders from the Dallas Cowboys and the SF 49ers.

As of 2006, a competition strictly for NFL cheerleaders was introduced on The NFL Network, called NFL Cheerleader Playoffs. Two cheerleaders from each cheerleading team compete against other mini-teams in various athletic events. This includes kayaking, 100 yard dash, obstacle courses, and other events.

As of 2011, the only teams without cheerleaders are the Chicago Bears, Cleveland Browns, New York Giants, Detroit Lions, Green Bay Packers, and the Pittsburgh Steelers. The February 2011 meeting of the Packers and Steelers at Super Bowl XLV was the first time a Super Bowl featured no cheerleaders.[16]

Each year, one squad member from every NFL team is chosen to participate in the collective Pro Bowl cheerleading squad. Traditionally, this is the highest honor of talent and popularity an NFL cheerleader can receive. The Pro Bowl Cheerleaders were founded in 1992 and directed by Jay Howarth and Angela King-Twitero, choreographed by John Peters. 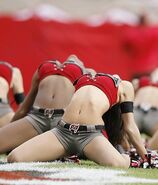