NFL Europe was an American football league which operated in Europe from 1991 until 2007. Backed by the National Football League (NFL), the largest professional American football league in the United States, it was founded as the World League of American Football (WLAF) to serve as a type of spring league. In 1995, when the league was revamped after a two-year hiatus, the league name was shortened to the World League. In 1997, the league rebranded itself as the NFL Europe League or NFL Europe, which it held for most of the rest of its lifetime. For the league's last season, it would officially change its name to NFL Europa.

At the time of its disbanding, there were six teams in the league: five based in Germany and one in the Netherlands. Players in NFL Europa were predominantly assigned by National Football League teams who wanted these younger, "developmental" players to get additional game experience and coaching. The expenses of these players and their coaches while living in Europe were assumed by the league.

NFL Europe was founded in 1991 as the World League of American Football. The original WLAF was an American football league partially backed by the National Football League and, like the later NFL Europa, was a spring developmental league. Originally, the ancestor to NFL Europe had 10 teams playing a 10-game regular season: six teams from the United States, three European teams, and one Canadian team. Two additional franchises were initially proposed in Mexico City and Milan, but never formed. The two teams emerging from the WLAF semi-final playoffs met at the end of the season in the World Bowl. The first two World Bowl games were held at predetermined locations much like the modern Super Bowl. The original WLAF was barely noticed in the United States, and only marginally more popular in Europe. Total attendances at the fifty games in each season were between 1.2 and 1.3 million, giving an average game attendance in the mid twenty thousands. The WLAF suspended operations in 1993 prior to the season. The Frankfurt Galaxy was the last WLAF team left in NFL Europe.

The National Football League still liked the idea of a spring developmental league, and after revamping itself into an exclusively European circuit, the league re-launched in 1995, consisting of the three existing European teams from the original format as well as three new teams in Amsterdam, Düsseldorf and Edinburgh (who would compete as Scotland). All six teams play in a single division and the 10-game format was preserved. The original playoff format matched the first-half champion against the team with the best overall season record (or the runner-up, in the event the first-half champion also had the best overall record.) The first-half champion would host the championship game. This format was abandoned after the 1997 season. In subsequent years, the two teams with the best overall record after 10 games competed in the World Bowl, to be hosted at a pre-determined site. The change was largely attributed to the play of the eventual 1997 World Bowl champions, the Barcelona Dragons, who secured a World Bowl berth with a 4-1 first-half record and proceeded to rest players and play what some argued was low-intensity football in the second half, finishing with just a 5-5 record and third place overall in the league's standings.

By the end of the 1997 season, the league was growing concerned that their markets outside of Germany were not living up to their potential. Radical changes were made to the two British teams, spelling the beginning of the end for one. The London Monarchs would become the England Monarchs, switch their colours from blue, gold and red to red, white and black, and play their home games in London, Birmingham and Bristol. The league had been unhappy with the Monarchs as it was, since the field at their London stadium, White Hart Lane, was only 93 yards long—nowhere near enough to hold a full 100 yards and two ten-yard endzones. Also, the Scottish Claymores would divide their schedule between Edinburgh and Glasgow. Then, at a press conference in San Diego, California, during Super Bowl XXXII weekend, the league announced it too would be changing: the league would be rebranded as the NFL Europe League.

The NFL Europe era was beset by instability. The England Monarchs were shut down after the 1998 season, being replaced by the Berlin Thunder. In 2002, the Barcelona Dragons became an official section of FC Barcelona, adopting the name FC Barcelona Dragons, but folded after the 2003 season, when Barça dropped its sponsorship and the NFL was not interested in keeping the franchise alive. A new German franchise, the Cologne Centurions, took the Dragons' place in the league in 2004. The Scottish Claymores, one of the 3 teams added to the league in 1995, were also discontinued with their replacements, the Hamburg Sea Devils, being established for the 2005 season. With this change, five of the six teams in the league's final incarnation were from Germany, with one from the Netherlands, leading some of the league's detractors to refer to it as 'NFL Deutschland' or 'NFL Germany'; even speculating that the Admirals were only still in the Netherlands because they had won World Bowl XIII, and it wouldn't look good if the league moved its champions, or simply to justify its "European" identity by keeping one team outside the German borders. German teams, unsurprisingly, won all 7 World Bowl Championships between 1998 and 2004. In 2005 the total attendance at the thirty games was 568,935, and the average attendance of 18,965 was the highest since 1992. On the other hand, TV contracts were cancelled as a result of teams moving out of the countries they were based upon, such as the NFLEL deal with satellite TV platform Digital+ in Spain after the demise of the Barcelona Dragons.

In 2006, the league's schedule opened and closed one month earlier than normal because of the 2006 FIFA World Cup, which was played at four of the five German stadiums that hosted NFL Europa teams. (Only the LTU Arena in Düsseldorf was not chosen to host Cup matches, and that stadium hosted the World Bowl that year.)

On 11 September 2006, NFL Europe officially re-branded itself as NFL Europa to reflect the name used for Europe in most European languages. Informally, the name "NFL Europe" continued to be used in the United States, including for the league's English-language Web site, nfleurope.com.

On 29 June 2007, NFL officials announced that the league would be disbanded effective immediately[1], calling the decision a sound business move that will allow for a stronger international focus on regular-season games outside the United States.

The announcement came less than a week after the Hamburg Sea Devils beat the Frankfurt Galaxy 37–28 in the World Bowl championship in Frankfurt in front of a crowd of 48,125.

NFL commissioner Roger Goodell thanked the fans for their support but said it was time to develop a new international strategy, terming the move to fold NFL Europa the "best business decision." The league reportedly was losing about $30 million a season.

The NFL has traditionally used a sudden death format for overtime. Regular season games have a single period of overtime during which the first team to score wins the game. If neither team scores, the game is declared a tie. In post-season games, overtime is extended indefinitely until one team scores. In NFL Europa, however, the overtime period lasted for 10 minutes with the requirement that each team must have the opportunity of possession at least once. So, in NFL Europa, it was possible for one team to score in overtime then have to kick-off to the opponent and give them a chance to either equalize or win the game. The winner was the team with the highest score after both teams had had possession. If the score was even after the second team's possession, the overtime would continue as sudden death. If still tied after 10 minutes, the game ends as a tie. Only two games ever remained tied after overtime in WLAF/NFL Europa history: London Monarchs versus Birmingham Fire in Week 4 of the 1992 season, and Berlin Thunder at Hamburg Sea Devils, on 1 April 2006. The score of both games was 17–17.[2]

With association football (or soccer) being the traditionally popular sport in Europe and American football being a relative newcomer, the rules were changed slightly to encourage a greater element of kicking which was intended to make the game more enjoyable for soccer and rugby fans. The league did this by awarding four points to field goals of more than 50 yards, as opposed to three points in the NFL. This had the interesting side-effect that a touchdown and point-after lead (seven points) could be equaled by one regular field goal (three points) along with a long field goal (four points). This concept would later be adopted by the proposed New United States Football League, with the distance required for the fourth point increased from 50 to 55 yards.

Also, there was a requirement that at least one player of non-American extraction, referred to as "national" players, participate in every down for both teams as of the 2006 season (in previous seasons one was required to play only on every down of every other series). In addition to European players a number of Mexican and Japanese players played as national players. Up until the 2004 season, kicked conversion attempts and short field goals were attempted by national players. Since there are few European players who have had the chance to compete at a level comparable to U.S. college football and the NFL, many, if not most, of the European players ended up as kickers.

Among the notable national players included Scott McCready, an English wide receiver who played some preseason games for the New England Patriots, the Claymores' wide receiver Scott Couper, who played a pre-season game for the Chicago Bears, Constantin Ritzmann, a German defensive end who had played for the University of Tennessee, and Rob Hart, an English rugby player who became a placekicker; he kicked barefoot.

The 1995 WLAF relaunch featured uniforms with a significantly different look to what is traditionally associated with American football. Instead of the full-size numbers centred on the front of the jersey, the team logos took precedence, with a smaller number over the right collarbone area. [3] The Monarchs reverted to the traditional look in 1997 and the rest of the league followed a year later. 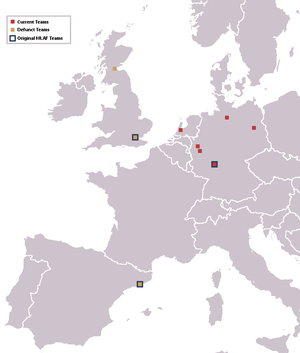 Although the last version of the NFL's developmental league had no U.S. teams, American television coverage continued until the end. From 1995 to 1998, the primary TV carrier was FX, which carried two games a week, one on Saturday and the other on Sunday. From 1999 to 2004, Fox Sports Net showed a "game of the week" on Saturday, with DirecTV viewers receiving additional live games on channels that normally carried NFL Sunday Ticket. In 2005, NFL Network began showing all regular season games, either live or on tape delay, and this continued until the league folded.

Game broadcasts were also available throughout Europe and in other territories throughout the world.

EuroPass, an offshoot of FieldPass, broadcast Internet video of games, free of charge, in the league's later years.

Retrieved from "https://americanfootballdatabase.fandom.com/wiki/NFL_Europa?oldid=22225"
Community content is available under CC-BY-SA unless otherwise noted.