The Missouri Valley Conference (also called MVC or simply "The Valley") is the second-oldest college athletic conference in the United States. Currently, its members are located in the midwestern United States. The conference participates in the NCAA's Division I.

Founded in 1907 as the Missouri Valley Intercollegiate Athletic Association (MVIAA), the only college conference that is older is the Big Ten. However, some consider the MVC to have been formed from a split of the MVIAA in 1928. Most of the larger MVIAA schools formed a conference that retained the MVIAA name and would ultimately become the Big Eight Conference. The smaller schools, plus Oklahoma A&M (now Oklahoma State University, which ultimately [re]joined the Big Eight in 1957), formed the MVC. During the Big Eight's existence, both conferences claimed 1907 as their founding date, as well as the same history through 1927. It was never definitively established which conference was the original and which was the spin-off, but given that the Big Eight self-terminated in 1996, only the MVC continues to have a claim to the original heritage.

During the 2006–2007 college basketball season, MVC teams held a 74–27 non-conference record, including a record of 44–1 at home. The Valley finished in the Top 6 of the RPI and ahead of a BCS conference for the second consecutive year, while also garnering multiple NCAA bids for the ninth straight year and 12th of 14.[1]

* - Tulsa re-joined the MVC only for men's soccer. 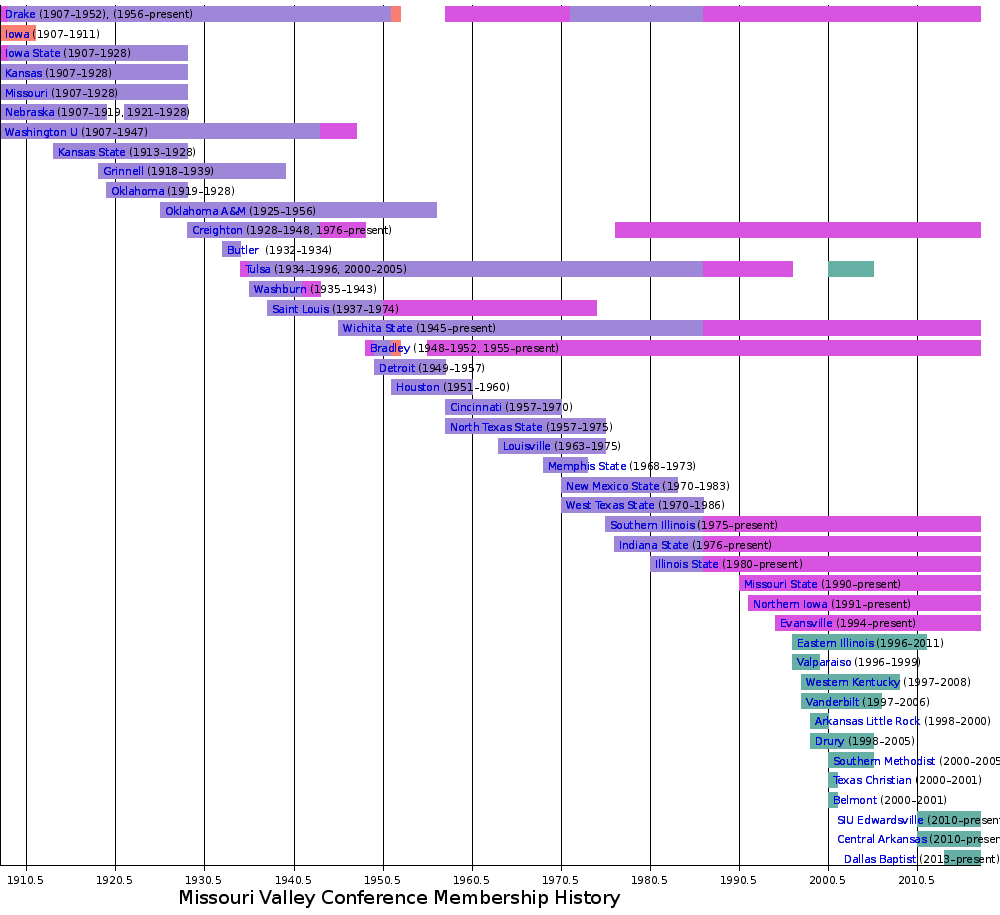 The Missouri Valley Conference Men's Basketball Championship is often referred to as Arch Madness, in reference to the Gateway Arch at the tournament's present location of St. Louis, Missouri, and a play on "March Madness".

NCAA Championships as of June 2010

Football, Helms and AIAW titles are not included in the NCAA Championship count.

The Valley is well known for having some of the most dedicated fanbases in all of college basketball, with several members regularly selling out their large arenas on a nightly basis throughout the year. One member (Wichita State) sold out every single game for the 2006–07 season, while another member (Creighton) continues to reset the state of Nebraska attendance record for a college basketball game every season.

In 2010–11, the Valley maintained its position as the eighth ranked conference in average attendance.[17]

The Valley made history in March 2007 with record attendance for four days at St. Louis' Scottrade Center as 85,074 fans turned out to watch the five sessions of the tournament. The two sellout crowds of 22,612 for the semifinals and final of the 2007 State Farm Tournament set an all-time attendance record for basketball at the arena and also gave The Valley the distinction of having the largest championship crowd for any of the 30 NCAA conference tournaments in 2007.[18]


Cite error: <ref> tags exist for a group named "n", but no corresponding <references group="n"/> tag was found.
Retrieved from "https://americanfootballdatabase.fandom.com/wiki/Missouri_Valley_Conference?oldid=43583"
Community content is available under CC-BY-SA unless otherwise noted.