The Mid-America Intercollegiate Athletics Association (MIAA) is a college athletic conference which operates in the states of Kansas, Missouri, Nebraska and effective in 2012 in Oklahoma in the Midwestern United States. The conference was formerly known as the Missouri Intercollegiate Athletic Association, but changed its name in 1992, after it expanded into Kansas. It participates in the NCAA's NCAA Division II.

Nebraska–Omaha joined the conference on July 1, 2008.[3] On July 3, 2007, Southwest Baptist University was granted independent status for their football team, while all remaining teams will stay in the MIAA.[4] Lincoln University of Missouri (after revitalizing its dormant football program) was re-admitted to the MIAA by a vote of the CEO Council on January 30, 2009, and resumed membership in the 2010-11 academic year. On July 8, 2009, the MIAA CEO Council voted to remain a 12-team league for the foreseeable future, denying an application by Rockhurst University (which does not have a football team but wanted to compete in other sports). The vote ended short term speculation about the League expanding to 16 teams divided into two divisions.[5] Southwest Baptist will rejoin the MIAA in football for the 2013 football season,[6] which will mean the schools can then play an 11-game conference football schedule with no non-conference games. Currently, only schools in the Football Bowl Subdivision (formerly Division I-A) are allowed to schedule 12 regular-season games in all seasons. Football Championship Subdivision (formerly I-AA) schools are allowed to schedule 12 games in years that contain 14 Saturdays in the period starting with Labor Day weekend and ending with the Saturday before Thanksgiving; the next season this will occur will be 2013.

In July 2010 it was reported that the conference was seeking to expand to 16 teams and is considering adding the four following schools:[7] On July 30 the MIAA announced the University of Central Oklahoma and Northeastern State University would join after leaving the Lone Star Conference tentatively in the 2012-13 academic year. Lindenwood University submitted an application in May 2010 and after a few months of speculation, Nebraska-Kearney formally submitted an application to the MIAA on August 2, 2010. Both were formally approved and accepted on September 24, 2010.[8] Once the expansion completes in 2012 the schools will only play each other in football and will play no non-conference games. The MIAA has opted not to divide into divisions in the 16-team arrangement. Teams that are closest geographically will play each other every year and will rotate through the other conference members in other years. The move to expand the league was spurred at least in part after Northwest Missouri during its national championship game run had problems finding non-conference teams that would play it resulting in 2010 with it having 10-game rather than 11-game schedule.[9] The arrangement will end annual rivalries such as the Hickory Stick and Fall Classic at Arrowhead with the teams playing each other every other year or more. The following season after the expansion of the conference, on March 13, 2011, Nebraska–Omaha announced that they will be joining the Summit League and moving to Division I for the 2011-2012 season.[2]

In June, 2012 Truman State University announced they had been accepted for membership in the Great Lakes Valley Conference effective Fall, 2013 and would be leaving the MIAA. Truman is one of only three founding members of the MIAA remaining in the conference.[10]

When the conference was created it consisted of private and public schools. In 1924 it reorganized to include only public schools.,[11] and conference records tend to begin with that date. The schools left behind in the reorganization went on to later form the Missouri College Athletic Union, which would in time become the current Heart of America Athletic Conference in the NAIA.

Lincoln University was removed from the conference in 1999 because it did not have a football program since 1989. Lincoln has since revitalized its football program.[12] 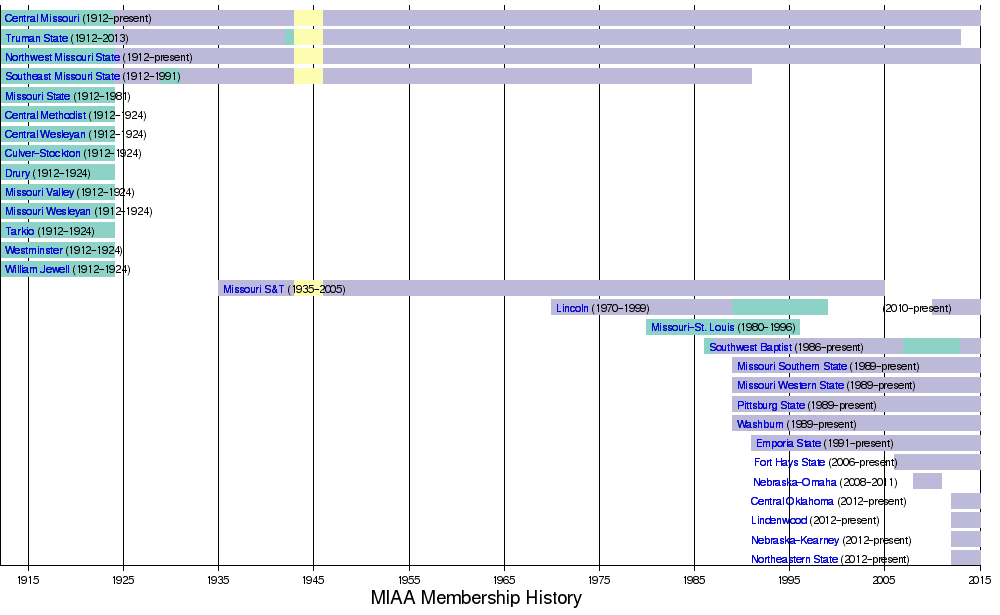