The Louisiana Bayou Beast was a team in the Professional Indoor Football League (PIFL) in 1998, in the Indoor Professional Football League (IPFL) in 1999, and reincarated in 2001 in the National Indoor Football League (NIFL). The Bayou Beast franchise was owned by James (Sr.) and Carolyn Shiver, who currently own and operate the NIFL which is based in Lafayette, Louisiana. The Bayou Beast competed in the PIFL in 1998, playing their home games at the Pete Maravich Assembly Center on the LSU campus in Baton Rouge. The team colors were red, black, and white. In 1999, the PIFL changed its name to the IPFL, and the Beast changed arenas, moving to the Riverside Centroplex in downtown Baton Rouge for that season. After two seasons of dismal attendance, the Bayou Beast moved to Alexandria. and were renamed the Louisiana Rangers for the IPFL 2000 season. The team was reincarated in 2001 for the National Indoor Football League, and based in Monroe. Following that season, the franchise folded.

The Bayou Beast played its inaugural game on the road against the Madison Mad Dogs on April 10, 1998. They won the game 36-28 in front of a crowd of 4,283. The team logo, consisting of a raging "Beast" busting through his football uniform, known as "Blitz". Some spectators said that the "Bayou Beast" logo (Blitz) looked like "a raccoon on steroids".

In their first year, they won 13 out of 14 games (losing only to the Colorado Wildcats 41-49 on May 9, 1998) to win the PIFL's first regular season title. With a 10-game win streak to end the season, the Bayou Beast were seeded in the #1 position with the home field advantage throughout the playoffs.

Their first playoff game would be against the #4 ranked Colorado Wildcats. A couple of key events took place before the opening kickoff of this game. First, the Pete Maravich Assembly Center, home arena of the Bayou Beast, could not be used since it was previously booked for that weekend. A deal was worked out with the Riverside Centroplex to host the Beast's first playoff game. Secondly, the owner of the Colorado Wildcats was financially strapped by the end of the season and was about to forfeit their playoff appearance rather than pay travel costs to Baton Rouge. The Shivers, the Bayou Beast owners, offered to pay travel expenses for the Wildcats to compete against the Beast. This would also be their chance to avenge the only loss of the season by defeating them in the playoffs. The Bayou Beast did just that by winning 67-51.

The only PIFL Championship game was hosted in Baton Rouge, back in the Pete Maravich Assembly Center. It pitted the #1 Louisiana Bayou Beast versus the second-seeded Madison Mad Dogs who had defeated their sister team (both teams owned by Keary Ecklund), the #3 Green Bay Bombers 46-19. Louisiana quarterback Doug Coleman hit receiver Derrick Fobb with a 20-yard touchdown pass with no time remaining to give the Louisiana Bayou Beast the inaugural Professional Indoor Football League championship by a 42-41 margin. Coleman fumbled the snap on the big play but managed to pick up the ball and run out of trouble before spotting Fobb alone in the end zone. Matt Huerkamp, the league's top kicker, nailed the extra point for the win. Coleman's throw, his fourth scoring toss of the evening, came one play after Madison was penalized for a facemask penalty, giving the Bayou Beast one final untimed down.

Madison had taken a 41-35 lead with just 18.3 seconds remaining on a Raymond Philyaw to Mandrell Dean strike. On the play, Dean leaped between two defenders to pull down what at the time looked like the decisive score. Following the Mad Dogs' touchdown, Coleman hit Michael Lewis with a throw to set the Bayou Beast up in Madison territory. The Madison Mad Dogs defense stiffened, first coming up with a sack and then pressuring Coleman into an incomplete pass. The failed pass attempt would have been the final play of the game; however, an incidental facemask penalty gave Louisiana one last shot.

‡ this game scheduled as an exhibition game to replace the forfeit

In 1999, the Beast started off with a new arena Riverside Centroplex, two new head coaches (Jeff Majors & Chris Carrier) [1], a new GM (Les Crooks, formerly GM of the ECHL Baton Rouge Kingfish) [2], a local television and production deal to air the games tape-delayed along with a weekly coach's show, Wall2Wall Football (KTTE 11 - Ind. Baton Rouge), and a kisok at the local mall selling IPFL and Bayou Beast merchandise (Cortana Mall). Then the wheels started to fall off. The Beast lost their season opener on the road to the Mississippi Firedogs 35-45 in front of a crowd of 5,138. Then, the new GM left the team and the production company was dropped after they failed to record the first home game correctly. The Beast media relations director took over as Interim GM [3] until the position was filled with Ted "Rock" Knapp from Houston, Texas [4]. After trying Co-Head Coaches for the '99 Bayou Beast, the team had a 2-5 record going into an off week. During that off time, Ted "Rock" Knapp was promoted to Head Coach/General Manager of the Bayou Beast and Coaches Majors and Carrier were terminated.

The first game for the "Rock" as head coach of the Bayou Beast was at home against the Texas Terminators. During the game, when Chris Beard tackled Texas wideout Cory Caesar, Beard's head snapped back. This broke his neck and he was not able to move. He laid motionless for 30 minutes on the field. His condition was unknown to other players and spectators after his being taken to Our Lady of the Lake Hospital. During the delay, both the Louisiana Bayou Beast and the Texas Terminators got together at midfield, kneeled, and prayed for Beard. The next day, Beard underwent a seven-hour surgery to his neck. He was in intensive care at the hospital. The hit left him paralyzed in his arms and legs. [5] Dr. Steven Bailey performed the surgery and said his diagnosis was undetermined at this time. Television station WAFB 9 (CBS - Baton Rouge) reported that Beard's neck may have been injured on an earlier play and showed a film clip of it on their 10pm local news. Additionally, throughout the game, Beard had failed to attach his chin strap on his helmet. It is undetermined if it was attached on the play he was injured or injured more severely by not having it attached. A trust fund was set up at a local bank for donations to help with the hospital costs. [6]

The next Bayou Beast game, against arch-rival Mississippi Fire Dogs at home, was dedicated to Chris Beard. The Beast would donate 25% of all ticket sales (till the end of the season) into the Chris Beard trust fund [7]. Replica jersey's of Beard's and other merchandise were sold to raise money for the fund, and a giant six-foot "Get Well" card was signed at the gate by all who attended this game. The team asked the league if they could remove the "Beast" logo from the side of their helmets for the rest of the '99 IPFL season, as their tribute to Chris. The league denied their request for the logo but granted permission for the removal of the yellow stripe on the top of the helmet. From that game on, every Bayou Beast game would be played without a stripe on the helmet. The Bayou Beast won with a 31-yard field goal by Mike Shafer during the second overtime period, making this the longest IPFL game ever played. [8]

On July 13, the Bayou Beast released head coach Ted "Rock" Knapp. No reason was given. Knapp had a record of 2-3 as head coach and 3-5 since joining the Bayou Beast as the general manager. The following day, Barrett Murphy was named the new head coach of the Louisiana Bayou Beast. Barrett brought back Jeff Majors as the offensive coordinator, and Gary Frank remained with the team as linesman coach.

The first test for Murphy and the Bayou Beast was a heartbreaking loss to the first place Texas Terminators, 16-23. The lost gave Texas the 1999 IPFL regular season championship title, home field advantage as host of the 1999 IPFL championship game, and knocked the Bayou Beast out of the playoff race. Barrett ended with an overall record of 2-2 in the last four games of the season.

On February 12, 2000, The Louisiana Bayou Beast IPFL football team announced that it would relocate to Alexandria, LA. and would be renamed the Louisiana Rangers for the 2000 IPFL season.

The team was reincarated in 2001 in the National Indoor Football League (NIFL) and this time based in Monroe, Louisiana. The Shivers owned and operated the team and now were the owners of the NIFL, too. The Bayou Beast only managed a 1-13 record that year, even with switching head coaches in the middle of the season. After the season, due to low attendance in Monroe, the franchise was folded. Contrary to popular belief, the Bayou Beast were NOT sold, relocated to Houma, Louisiana, and renamed the Houma Bayou Bucks for the 2002 NIFL season. [9] 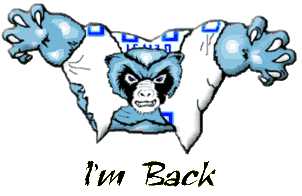 † Co-Head Coaches of the Bayou Beast

† Beard was paralyzed in a game on June 6, 1999 against the Texas Terminators.

‡ These players were selected to the PIFL All-Star 1st Team.

Retrieved from "https://americanfootballdatabase.fandom.com/wiki/Louisiana_Bayou_Beast?oldid=188977"
Community content is available under CC-BY-SA unless otherwise noted.