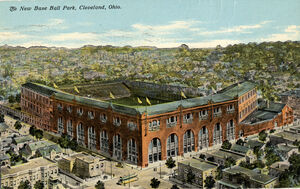 League Park was a baseball park located in Cleveland, Ohio. It was situated at the northeast corner of Lexington Avenue and E. 66th Street in the Hough neighborhood. It was home to the National League Cleveland Spiders, the American League Cleveland Indians, and the Cleveland Buckeyes of the Negro American League. Most of the structure was demolished in 1951, although some remnants still remain.

League Park was opened on May 1, 1891, with 9,000 wooden seats.[1] The National League's Cleveland Spiders played there until going out of business after a disastrous 20–134 season in 1899 due to having their best players stripped from their roster by an unscrupulous owner. They were replaced the very next year by the Cleveland Lake Shores, which was initially a minor league team. In 1901, the renamed Cleveland Bluebirds were a charter member in the new American League, which became a major league. (Between 1901 and 1915, the team would change names thrice before settling on "Indians".) The park was rebuilt for the 1910 season as a concrete-and-steel stadium—one of two to open that year in the American League, the other being Comiskey Park. The new park had more than double the seating capacity of its predecessor.

In 1916, new team owner "Sunny Jim" Dunn renamed the park "'Dunn Field." The Indians hosted games four through seven of the 1920 World Series at Dunn Park. When Dunn passed away in 1922, his wife inherited the ballpark and the team. When Dunn’s widow, by then known as Mrs. George Pross, sold the franchise in 1927 for $1 million to a group headed by Alva Bradley the name reverted to the more prosaic "League Park" (there were a number of professional teams' parks generically called "League Park" at the time).[2]

From July 1932 through the 1933 season, the Indians played at the new and far larger Municipal Stadium. However, the players and fans complained about the huge outfield, which reduced the number of home runs. Moreover, as the Great Depression worsened, attendance at the much larger facility plummented.[3] In 1934 the Indians moved most of their games back to League Park.

In 1936, the Indians began splitting their schedule between the two parks, playing Sunday and holiday games at Cleveland Stadium during the summer and the remainder at League Park. Beginning in 1938, they also played selected important games downtown at Cleveland Stadium. Lights were never installed at League Park, and thus no major league night games were played there. However, at least one professional night game was played on July 27, 1931, between the Homestead Grays and the House of David, who borrowed the portable lighting system used by the Kansas City Monarchs.

By 1940, the Indians played most of their home schedule at Municipal Stadium, abandoning League Park entirely after the 1946 season. League Park became the last stadium used in Major League Baseball never to install permanent lights.

After the demise of the Negro American League Cleveland Buckeyes following the 1950 season, League Park was no longer used as a regular sports venue. Most of the structure was demolished the next year. The Cleveland Browns football team would continue to use the aging facility as a practice field until the late 1960s.

When it originally opened in 1891, it had 9,000 wooden seats.[1] A single deck grandstand was behind homeplate, a covered pavilion was along the first base line, and bleachers were located at various other places in the park. The ballpark was shoehorned to fit into the Cleveland street grid, which contorted the dimensions into a rather odd rectangular shape by modern standards. The fence in left field was 385 ft, a tremendous 460|ft away in center, and a short 290|ft down the right field foul line.[4] However, batters had to hit the ball over a 60|ft fence to hit a home run (by comparison, the Green Monster at Fenway Park is only 37|ft high).

It was essentially rebuilt prior to the 1910 season, with concrete and steel double-decker grandstands, expanding the seating capacity to 21,414. The design work was completed by Osborn Engineering, a local architecture firm that would go on to design several iconic ballparks over the next three years, including Comiskey Park, the Polo Grounds, Tiger Stadium, and Fenway Park. The front edge of the upper and lower decks were vertically aligned, bringing the up-front rows in the upper deck closer to the action, but those in back could not see much of foul territory.

batters still had to surmount a 60|ft fence to hit a home run (by comparison, the Green Monster at Fenway Park is only 37|ft high). The fence in left field was only five feet tall, but batters had to hit the ball 375|ft down the line to hit a home run, and it was fully 460|ft to the scoreboard in the deepest part of center field. The diamond, situated in the northwest corner of the block, was slightly tilted counterclockwise, making right field not quite as easy a target as Baker Bowl's right field, for example.

Today the site is a public park. A small section of the exterior brick facade (along the first-base side) still stands, as well as the old ticket office behind what was the right field corner. The last remnant of the grandstand, crumbling and presumably unsafe, was taken down ca. 2002 as part of a renovation process to the decaying playground.

The park is currently slated for a massive renovation/rebuild that will restore it to its original state.[5]

Some historic events that took place at League Park include the following:

Retrieved from "https://americanfootballdatabase.fandom.com/wiki/League_Park?oldid=34090"
Community content is available under CC-BY-SA unless otherwise noted.