The Kansas Collegiate Athletic Conference (KCAC) is an intercollegiate athletic conference affiliated with the NAIA. The KCAC is the oldest conference in the NAIA and the second oldest in the United States, tracing its history to 1890.

On February 15, 1890, the Kansas Intercollegiate Athletic Association was formed; it was the first successful attempt to organize Kansas colleges for the purposes of promoting and regulating amateur intercollegiate athletics. In addition to the private universities and colleges, the conference also included Kansas State Agriculture College (now Kansas State University), the University of Kansas, and Washburn University. In November of that year, the first college football game in Kansas was played between the Kansas Jayhawks and Baker University.[1]

On December 1, 1928, the Kansas Intercollegiate Athletic Conference was formally disbanded and replaced by a new Kansas College Athletic Conference which included six members and formed the present legal entity. It was commonly referred to as the "Little Six", in contrast to the Big Six Conference that eventually became the current Big 12. By 1968 the conference grew to include 12 members. It was organized into Northern and Southern divisions until 1970 when three colleges withdrew to join Missouri-based conferences. In the mid-1970s the name was changed to its current form.[2]

In the 1905 season, the Coleman Company set up temporary gas-powered lighting for a night game against Cooper College (now called the Sterling Warriors). It was the first night football game played west of the Mississippi River.[3] Fairmount won the game 24–0.[4]

On December 25, 1905, Wichita State (called "Fairmount College" at the time) played a game against the Washburn Ichabods using a set of experimental rules. The game was officiated by then Washburn head coach John H. Outland.

The experiment was considered a failure. Outland commented, "It seems to me that the distance required in three downs would almost eliminate touchdowns, except through fakes or flukes."[5] The Los Angeles Times reported that there was much kicking and that the game was considered much safer than regular play, but that the new rule was not "conducive to the sport."[6]

In his history of the sport of football, David M. Nelson concluded that "the first forward passes were thrown at the end of the 1905 season in a game between Fairmount and Washburn colleges in Kansas."[7] According to Nelson, Washburn completed three passes, and Fairmount completed two.

The conference is currently composed of twelve independent or private institutions of higher learning from within Kansas, Oklahoma, Nebraska, and Missouri. The members (and year admitted): 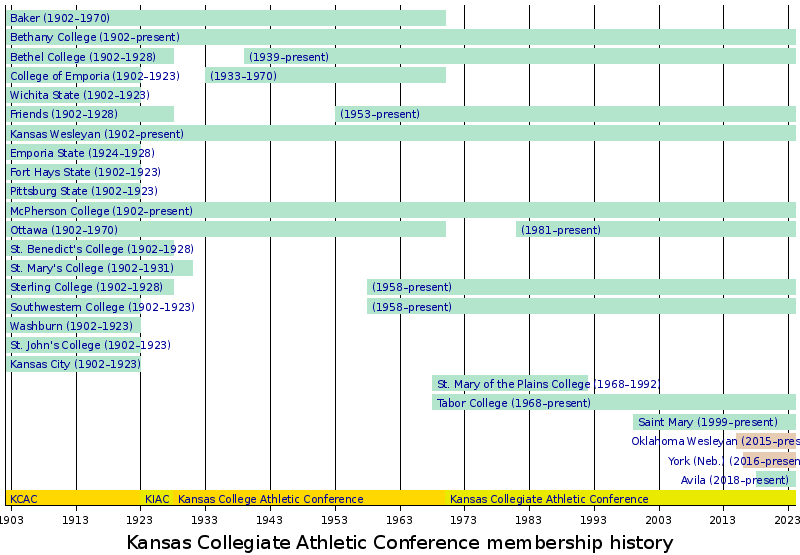 Retrieved from "https://americanfootballdatabase.fandom.com/wiki/Kansas_Collegiate_Athletic_Conference?oldid=206801"
Community content is available under CC-BY-SA unless otherwise noted.