It was October 19, 1919, when a group of athletes from Green Bay traveled to Ishpeming to play their very first road game. The team had just been formed on August 11, 1919 after George Calhoun, sports editor of the Green Bay Press-Gazette, put advertisements in the paper for local athletes. He and Curly Lambeau had discussed starting a football team earlier that summer. They met with the young athletes who replied to the ad in the editorial room of the old Green Bay Press-Gazette building on Cherry Street. This was the unofficial start of the team known as the Green Bay Packers, just a few years before the formation of the NFL.

This first road game played by the Green Bay Packers against the Ishpeming-Negaunee Twin City Eleven was held at Union Park in Ishpeming. The Twin-City Eleven was mostly a group of returning war veterans with an undefeated record. They were a tough team and had been five time Northern Michigan Champions, not losing a game on their home field in five years. Since the Packers had been clubbing the competition in their inaugural season with scores such as 61-0 (Marinette Northerners), 87-0 (Sheboygan Company C) and 76-6 (Racine) on their home field, Manager Calhoun looked to find a football team that would give his new team a good game. So, with a $200 budget for expenses, he took the team on the road to play the tough Twin City Eleven.

The Ishpeming Iron Ore newspaper wrote the day before the game, “Great Football Game - The Green Bay, Wis., football team and the Twin-Cities will meet at Union Park tomorrow in what is expected to be the greatest game to be seen in the Upper Peninsula this season. Green Bay has a record of being undefeated, and is said to be the very best city team in all Wisconsin. And the Twin-Cities can go some. So it is a pretty safe prediction that you will get your money’s worth if you go to the park tomorrow afternoon.” More than 3,000 fans turned out to watch to game!

From the account in the paper the next week, the ball was rarely in the Twin-City Eleven’s possession, with only a few instances where they made a first down. The Packer’s first score came after a few minutes of play; at the half, the score was 14 to 0.

The game saw many injuries; one Green Bay player suffered fractured ribs, one a broken ankle, and another a cracked collarbone. Since the Packers had a second string, it was much easier to replace those injured with an equally capable player. The Twin City team had minor injuries, and lost a few good players through the course of the game. They lost 33-0, with the Green Bay Packers scoring five touchdowns and kicking three of the extra points. The papers blamed many fumbles, injuries, and the Packers’ impenetrable defense for the loss. Plus, many of Green Bay’s players were former stars of college teams, such as Curly Lambeau.

The Iron Ore stated, “Lambeau, the Green Bay captain, played a star game. He is a former Notre-Dame fullback and displays the results of expert coaching.” They also wrote, “The Ishpeming-Negaunee boys are not one bit downhearted because of their defeat as they realize that they were up against a fast aggregation of stars.” Local sports writers were proud that the team had held the Packers’ score to only 33 points.

That feeling of pride didn’t last long. Upon returing to Green Bay, Manager Calhoun wrote in the Green-Bay Press Gazette that the Ishpeming-Negaunee players played with “rough-neck tactics.” He stated the play was so rough that the doctor and water boy were in their glory at all times. This outraged the locals and the Iron Ore responded on October 25, 1919 with, “It is quite true that the game was hard-fought from start to finish, but it is a mighty poor aggregation of football players who are not aggressive and in the game at all times. The Packers have been piling up large scores all year against weak elevens and they expected the Twin-City boys to take to the woods and run away the same as some of those farmer outfits from down in the nickel-cigar belt in Wisconsin. The Ishpeming-Negaunee players fought every inch of the way, but they fought in accordance with the rules of the game, and not a single man would be on the team today if he did not have some fight in his system.”

It was the last season for the Twin-City Eleven, though many of the players joined the Albert V. Braden Post football team in 1920. As for the fans, “Ishpeming-Negaunee fans are not of the variety who go back on a team because of defeat.” from the Iron Ore, October 25, 1919. 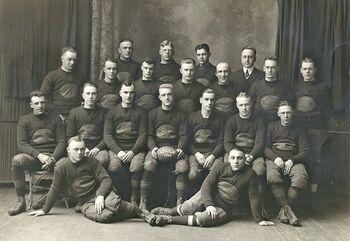 Retrieved from "https://americanfootballdatabase.fandom.com/wiki/Ishpeming?oldid=217793"
Community content is available under CC-BY-SA unless otherwise noted.