Start a Wiki
This article is about the league founded in 2008. For the first league with the name, see Indoor Football League (1999–2000).

The Indoor Football League (IFL) is a professional indoor American football league created in 2008 out of the merger between the Intense Football League and United Indoor Football. The league is the second highest tier in indoor/arena football behind the Arena Football League (AFL), and has operated continuously under the same name and corporate structure longer than any other current indoor football league, considering that the AFL's 2009 season was cancelled and the original league filed for bankruptcy that year. IFL players earn a minimum of US$200 per game played (before taxes). The season is typically about 14 games long, plus playoffs of two or more rounds.

The league was formed as a merger between the Intense Football League and United Indoor Football, announced the day before the 2008 National Indoor Bowl Championship, a game which pitted the champions of the two leagues against each other. The Sioux Falls Storm (United) defeated the Louisiana Swashbucklers (Intense) 54–42.

Of the 17 teams involved in the two previous leagues, 14 carried over to the new organization's 2009 season. An additional three teams came over from the CIFL and two expansion teams began their life in the new IFL. In the United Bowl, the Billings Outlaws (Intense Conference) took the league championship by defeating the RiverCity Rage (United Conference) by a score of 71–62.

After losing two teams to attrition after the end of the 2009 season, and a third in January 2010, the IFL then added another nine franchises to boost its membership to 25 for the 2010 season. Three of the new teams were expansion franchises. Two moved over from the Southern Indoor Football League and Continental Indoor Football League. After playing nine games of the 2010 season the Alaska Wild suspended operations, leaving only 24 teams to finish the year. In the United Bowl, the Billings Outlaws (Intense Conference) took the league championship by defeating the Sioux Falls Storm (United Conference) by a score of 43–34.

Seven new teams were added to the IFL for the 2011 season. Some of these were new expansion teams, and others moved to the IFL from the AIFA. The IFL also lost nine teams during the offseason, bringing the total number to 22 for 2011. In the United Bowl, the Sioux Falls Storm (United Conference) took the league championship by defeating the Tri-Cities Fever (Intense Conference) by a score of 37-10.

For the 2012 season, the IFL switched to a two-conference format with no divisions,[1] due in large part to the loss of all the Texas-based teams (except the Allen Wranglers) to the newly formed Lone Star Football League. The Wranglers brought attention to the league for offering a $500,000 contract to unemployed wide receiver Terrell Owens to become the team's part-owner and wide receiver. Owens accepted the contract. ESPN3 carried Owens's debut game against the Wichita Wild, but his association with the team and the league proved to be short-lived. The front office of the league saw changes as well, as Commissioner Tommy Benizio resigned.[2] The league appointed assistant commissioner Robert Loving as the interim Commissioner.[2]

The league added the Minnesota-based Bemidji Axemen to expand to 10 teams but the Chicago Slaughter were sold and changed leagues, returning the IFL to nine teams for the 2014 season. In February 2014, the league announced that it would return to Montana in 2015 with the new Billings Wolves franchise.[4]

On July 27, 2014, Iowa Barnstormers president Jeff Lamberti hinted at joining the league by telling a local TV station that the franchise will explore "all options" in the off-season of their continuance to play, including leaving the Arena Football League and going to the IFL for 2015.[5] They joined the IFL in August 2014, becoming the fourth active AFL/af2 franchise to leave for the IFL since the Texas Revolution (formerly the Arkansas Twisters), the Tri-Cities Fever and the Green Bay Blizzard. (The Revolution left the IFL for Champions Indoor Football before ceasing operations in May 2019.)

This was the first season the IFL utilized roster restrictions which call for all teams to carry no more than seven players with three or more years' experience in Indoor/Arena football.[6] For the second consecutive season, an AFL team was strongly rumored to join the IFL, as Spokane Shock owner Nader Naini said on August 10, 2015 that he was considering all options for the team.[7] On September 1, the Shock officially joined the IFL, becoming the fifth active AFL/af2 franchise to leave for the IFL since the aforementioned Barnstormers, Fever, Blizzard and Revolution.[8] The Shock, however, would have to enter the IFL under a new identity as the Arena League announced on October 12 that they would retain the rights to the Shock logos and name, possibly for future use by another franchise in the state of Washington.[9] The team subsequently held a name-the-team contest, which resulted in their new identity as the Spokane Empire.[10][11]

On September 9, the Minnesota Havok (based in Mankato) were announced as an IFL team.[12] However, on January 29, just four weeks before the 2016 season was to kick off, the Havok were terminated by the league for failing to meet operational standards.[13]

On November 25, the Minnesota Axemen folded due to the team "Not fulfilling their commitments to the league."[14] Commissioner Mike Allshouse called the move a proactive one to prevent the team having to fold mid-season.[15]

Project FANchise, a group aiming to create a professional sports team where fans help run the day-to-day operations, announced they would operate a new team, the Salt Lake Screaming Eagles in Salt Lake City. A fan vote determined the team's name and logo, and select fans will have access to player personnel decisions and in-game play calling. Project FANchise also bought the Colorado Crush in October and began operating the team in the same manner.

During the 2016 season, the Billings Wolves' website was hacked, was never completely fixed, and was non-operational for months. Several former staff members claimed that the team had folded after the completion of the season. On October 24, 2016, the Wolves announced they had left the IFL because of state regulations and failing to find new ownership for the team.[17]

On October 17, 2016, the IFL announced it had added the Arizona Rattlers, previously of the Arena Football League, for the 2017 season.[18] The Rattlers were the third team in three consecutive seasons to leave the AFL for the IFL. The league rejected the bid of another former AFL franchise, the Jacksonville Sharks, who are located outside the IFL's regional territory. They subsequently announced their charter membership in an entirely new league, originally to have been called the Arena Development League but actually beginning play under the name National Arena League.[19]

After the 2017 season came to a close, the website for the Colorado Crush was shut down with no formal announcement on the franchise's future. Project FANchise, who also ran the Salt Lake Screaming Eagles, had announced they would start their own league and left the IFL, with both teams going up for sale.[20] On July 12, 2017, the Spokane Empire announced that they would be suspending operations effective immediately.[21]

On July 25, 2017, the IFL announced that only the Arizona Rattlers, Cedar Rapids Titans, Green Bay Blizzard, Iowa Barnstormers, and Nebraska Danger had committed to play for 2018.[22] However, expansion clubs and current member clubs had until September 1 to commit to the 2018 season.[23] On August 30, the Sioux Falls Storm announced that they had joined Champions Indoor Football for 2018 after winning six consecutive championships from 2011 to 2016. The Storm was shortly followed by the Wichita Falls Nighthawks.

The IFL then added the Bloomington Edge and West Michigan Ironmen from the CIF on September 12.[24] The CIF apparently then attempted to sue the IFL, Edge, and Ironmen for leaving the CIF after the two teams had already signed league affiliation agreements with the CIF for 2018. The IFL then threatened to sue the CIF, Storm, and Nighthawks in return despite neither former IFL team signing an affiliation agreement with the IFL for 2018.[25] The CIF then retracted their lawsuit with the IFL but also removed the Storm and Nighthawks from their 2018 schedule.[26] After the IFL meetings in October 2017, the Storm returned to the IFL[27] but the Nighthawks had to suspend operations.[28] While the CIF did drop the lawsuit against the IFL, it filed for an injunction against the Edge and Ironmen teams from participating in the IFL for breaking the terms of their signed affiliation agreements. A temporary injunction from participation in the league was granted on January 31, 2018, with the court ruling determining that both teams had been offered bribes from the owner of the Arizona Rattlers to break their contract with the CIF.[29][30] The schedule was revised in February for the six participating teams stating the Edge and Ironmen were to return in 2019.

During the season, the Cedar Rapids Titans' ownership announced the team was for sale with hopes of selling to new local ownership.[31] In June 2018, it was announced that the Titans had been sold to Roy Choi, a California-based businessman, with the intentions of keeping the team Cedar Rapids but would rebrand the team.[32][33] 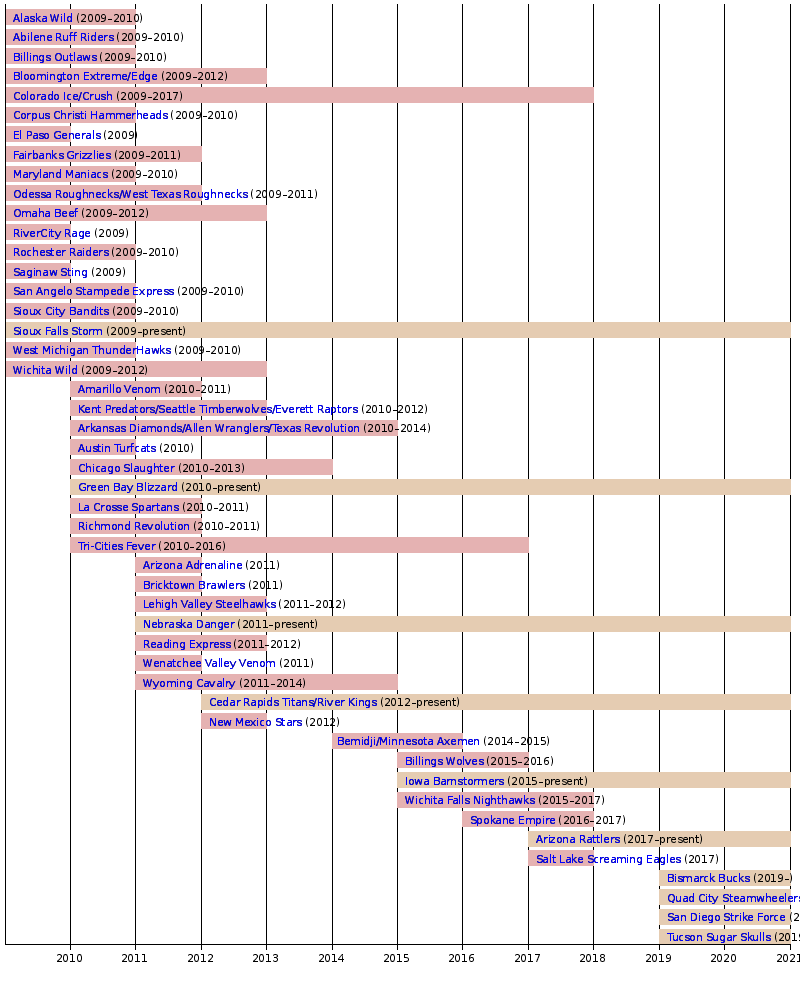 The IFL continues to use the "United Bowl" name originally used by United Indoor Football. The UIF used this name before they merged with Intense Football League to form the Indoor Football League. The UIF held United Bowl I, II, III, and IV in 2005 through 2008, with all four being won by the Sioux Falls Storm. Although the name "National Indoor Bowl Championship" was used for the 2008 contest between the UIF and the Intense Football League, the "United Bowl" name continues to be used for the combined league's championship instead.

Retrieved from "https://americanfootballdatabase.fandom.com/wiki/Indoor_Football_League?oldid=195826"
Community content is available under CC-BY-SA unless otherwise noted.