The Gulf South Conference (GSC) is an NCAA Division II college athletic conference which operates in the southeastern United States.

In 1971, the league changed its name to the Gulf South Conference; added Southeastern Louisiana (SELA) and Nicholls State (increasing the membership to eight); opened an office in Hammond, Louisiana; and began championships in all men’s sports. The following year, Mississippi College and Northwestern Louisiana (NWLA, now Northwestern State) were admitted. NWLA withdrew to go Division I two years later, followed by SELA and Nicholls State in 1979.

The conference continued with seven teams until 1981, when the presidents admitted Valdosta State. West Georgia joined in 1983. Eight years of stability ended in 1991 when Tennessee–Martin and Troy State went Division I, briefly dropping the GSC back to seven members, before the beginning of an expansion resulting in ten new members: Lincoln Memorial (1992–93); Alabama–Huntsville, Henderson State, Central Arkansas, and Mississippi University for Women (MUW) (1993–94); West Florida (1994–95); and Arkansas-Monticello, Arkansas Tech, Montevallo, and Southern Arkansas (1995–96). Jacksonville State went Division I at the end of 1992–93. Mississippi College dropped to Division III at the end of 1995–96 and was replaced by Christian Brothers to keep the Conference at 16 schools. In July 2000, the GSC welcomed Harding University and Ouachita Baptist University, making it the largest NCAA conference at any level with 18 schools. The Conference membership decreased to 17 when MUW dropped its athletics program at the end of the 2002–03 season.

Montevallo announced on June 27, 2008 that they will be leaving for the Peach Belt Conference following the 2008–09 season due to issues between the University's President and the Commissioner.

Former Commissioner Jim McCullough moved the GSC office to its present Birmingham, Alabama, location. The current Commissioner, Nate Salant, has been in office since October 1992.

The University of New Orleans, which was transitioning from Division I to Division II, was accepted into the conference in June 2011,[2] but the school announced intentions to stay Division I in March 2012.[3] In July 2011, Shorter University and Union University (Jackson, Tenn.) were accepted into the NCAA and will begin the multi-year transition process from the NAIA to NCAA.[4] Both universities will begin GSC competition in the 2012–13 academic year but will not be eligible for NCAA national tournaments until the 2014–15 academic year.[5] In August 2011, the GSC added the Florida Institute of Technology as an associate member for football beginning in the 2013 season.[6]

On October 11, 2012, Mississippi College announced[7] that it would petition the NCAA to leave Division III and return to the conference. 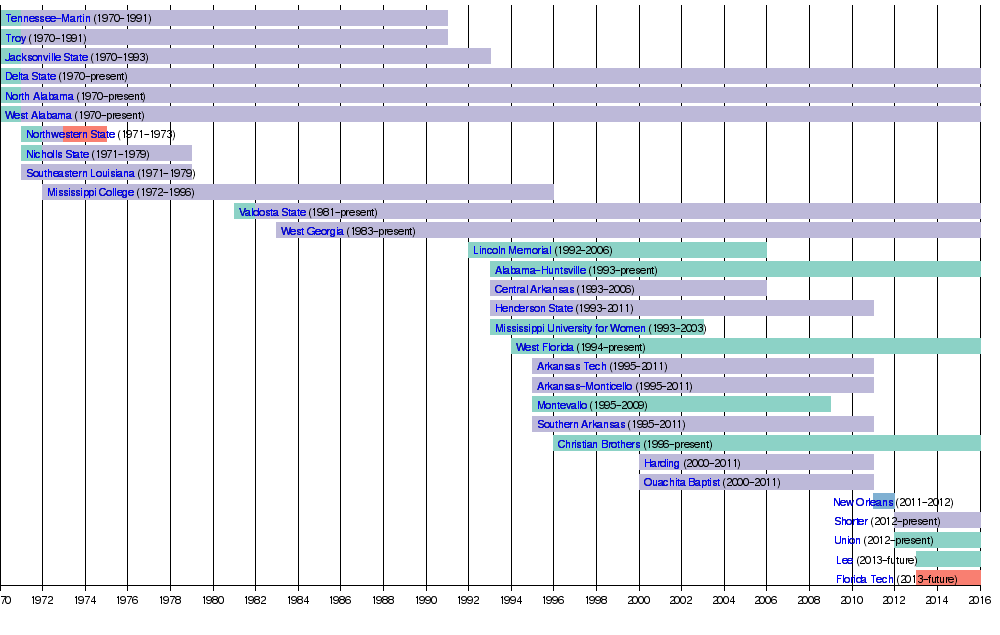 The GSC is perhaps best known for being the premier conference in NCAA Division II football. The three-year run put together by North Alabama in the mid-1990s is one of the most amazing feats in college football history. North Alabama went 41-1 during that span with the only loss being a 3 point loss to that season’s NCAA Division I-AA champion Youngstown State.

^A Valdosta State was not a member of the GSC in 1979.
^B Although not a conference-sanctioned sport, Alabama–Huntsville fields a men's ice hockey team. It won the Division II national championship in 1996 and 1998. After the NCAA discontinued Division II ice hockey championship, UAH moved to Division I for that sport and joined the College Hockey America conference. They now compete as an independent after the demise of the CHA but will join the Western Collegiate Hockey Association prior to 2013-2014.

Retrieved from "https://americanfootballdatabase.fandom.com/wiki/Gulf_South_Conference?oldid=144759"
Community content is available under CC-BY-SA unless otherwise noted.