The Erie Explosion is a professional indoor football team. It is a member of the Ultimate Indoor Football League, and plays its home games at the Louis J. Tullio Arena in Erie, Pennsylvania.

The Explosion began play in 2007 as the Pittsburgh RiverRats, playing that season's home games at the Rostraver Ice Garden in Rostraver Township, Pennsylvania. The "RiverRats" name and logo were originally supposed to be used by the Reading Express, but that team chose the Express branding instead, freeing it up for use by another AIFA team.[1]

On August 20, 2006, the RiverRats signed quarterback David Dinkins, formerly of the Erie Freeze of the AIFA, and designated him as the team's franchise player for the 2007 season.

The RiverRats played their first game on February 3, 2007 on the road in Tupelo, MS, but lost 54-34 to the Mississippi Mudcats. Their first home game was on February 18, 2007 which they lost 35-28 to the Reading Express.

The team finished their inaugural season at a respectable 7-7 record, good for fourth place in the Northern Conference and a wild-card playoff berth. Unfortunately, the Rats were eliminated in the first round, losing 42-24 to the eventual conference champions Reading Express.

On January 8, 2008 the RiverRats announced they would be leaving the Mon Valley in favor of Erie for the 2008 season, renaming themselves the Erie RiverRats. They replaced the city's previous AIFA team, the Erie Freeze.[2] The RiverRats have several Freeze connections, including many of the Freeze's best players: QB/WR David Dinkins, cornerback Jovon Johnson (himself an Erie native), ace kicker J.R. Cipra, center Jonathon Sitter, and defensive tackle Roosevelt Benjamin. League owner Michael Mink stated that he considers the RiverRats to be a consolidation of the original RiverRats and the Freeze[3] with the team retaining the RiverRats name, franchise and management structure.

The team signed Rod Rutherford, a former NFL backup, as the starting quarterback in the middle of the 2008 season. It is said that Dinkins recommended Rutherford to the team, and Dinkins (who originally was playing quarterback) moved to wide receiver to accommodate his arrival.

In 2009, Dinkins departed for the Wheeling Wildcats, and as a result, the RiverRats struggled all season to score points and missed the playoffs for the first time, finishing with a 3-11 record under head coach Steven G. Folmar.

On September 8, 2009 the RiverRats announced that Shawn Liotta would return to Erie as the head coach for the 2010 season. In December, it was announced that owner Jeff Hauser had sold a stake in the franchise to a local group that included Jeff Plyler (owner of Plyler Overhead Door of McKean, PA) and Bill Stafford (owner of several Subway restaurant locations in Erie), among others. Hauser will maintain a smaller stake in the team, which immediately dropped the RiverRats name. The team will remain in the AIFA, and the team adopted the corporate name "Erie Professional Football, Inc." in December 2009, in anticipation of a new franchise name to be announced in January 2010.[4]

On January 5, 2010, the team announced the four finalists of the name-the-team contest; Storm, Blizzard, Pulse, and Punishers. On January 14, 2010 the team was officially named the Erie Storm via a press conference, in which the team logo and colors were also released.

Aided by Dinkins's return, the briefly rechristened Storm rebounded to an 8-6 season in 2010, before losing to the Harrisburg Stampede in the playoffs. Dinkins retired at the end of the season.[5]

On May 5, 2010, Lake Erie College based in Painesville, Ohio has asked a court judge to order the Erie Storm not use the Erie Storm name due to similarities with their own name the Lake Erie Storm. As of October 2010, the name "Storm" has been dropped, and the team is once again using the name "Erie Professional Football," which remains the name of the team's corporate entity.

On December 3, 2010, the team announced its new identity as the Erie Explosion, including a new logo, but retaining the same color scheme as the Storm previously had. After dealing with the legalities of the previous name, the ownership of the Explosion have secured the legal trademark of the new name, ensuring that this will be the last re-brand in the foreseeable future.[6] The Erie Explosion was also one of 6 AIFA teams which were merged with the SIFL prior to the 2011 season. The Explosion announced the signing of Quarterback, Adam DiMichele, along with former local Erie Strong Vincent star, Maurice Williams, and college star receiver David Ball.

On May 21, 2011, the Explosion set a single-game franchise record, including an unofficial indoor football record, for the most points scored in a 138-0 blowout win over the Fayetteville Force after the Force was forced to restock its team with scrubs in an ownership change.[7] The margin of victory is the third-highest in all of professional football, and the highest in over 100 years: only the 1903 Massillon Tigers (who won a game 148-0) and 1904 Watertown Red & Black (who won a game 142-0) have had wider margins of victory

Erie was only one of the six charter AIFL markets to have continuously held an AIFL or AIFA team since the AIFL's founding in 2005, counting both the Freeze and the RiverRats/Storm. 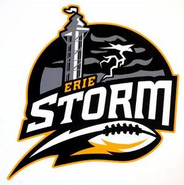 2011 as Erie Explosion
Add a photo to this gallery

As the Pittsburgh RiverRats

As the Erie RiverRats

As the Erie RiverRats

As the Erie Storm

Retrieved from "https://americanfootballdatabase.fandom.com/wiki/Erie_Explosion?oldid=30137"
Community content is available under CC-BY-SA unless otherwise noted.