Conference USA (C-USA) is a college athletic conference whose member institutions are located within the Southern United States. The conference participates in the NCAA's Division I in all sports. C-USA's offices are located in the Las Colinas business district of the Dallas suburb of Irving, Texas.

C-USA was founded in 1995 by the merger of the Metro Conference and Great Midwest Conference, two Division I conferences that did not sponsor football. To even out at 12 members (because Dayton, VCU, and Virginia Tech were left out of the merger[2]) the conference invited the University of Houston, but UH could not start C-USA play for a year due to committing to being in the Southwest Conference in its final year. The conference immediately started competition in all sports, except football which started in 1996.

In 2011, Conference USA and the Mountain West Conference announced a plan for a football only alliance.[3] Then on February 12, 2012, the league announced that it would dissolve in order to form an new legal entity merging its remaining members, the Mountain West and two to eight more schools.[4] However, because of financial issues related to NCAA rules, both conferences backed away from a full merger; as of April 2012, the likeliest scenario is now an all-sports alliance in which both conferences retain their separate identities.[5]

On May 4, 2012, C-USA announced that Charlotte, FIU, LA Tech, North Texas, and UTSA would join the league on July 1, 2013.[7] A couple weeks later on May 17, 2012, Old Dominion announced they would join C-USA on July 1, 2013.[8] Old Dominion will play eight conference opponents in football 2014 and be eligible for the C-USA championship, but will not be eligible for postseason play as the team is transitioning to FBS. Charlotte will officially begin conference play in football in the 2015 season. On November 28, 2012, it was announced that Middle Tennessee State University of Murfreesboro, Tennessee and Florida Atlantic University of Boca Raton, Florida would make the move to C-USA, joining FIU and North Texas universities as recent Sun Belt conference defectors.[9]

1 - Charlotte was a non-football member of the Conference from the original reunification in 1995 until 2005, and will re-join C-USA in 2013 as the school begins its football program, which becomes a full C-USA member in 2015.
2 - FIU joined C-USA initially in 2005 for men's soccer only and in 2013 will move all sports C-USA sponsors to the conference. 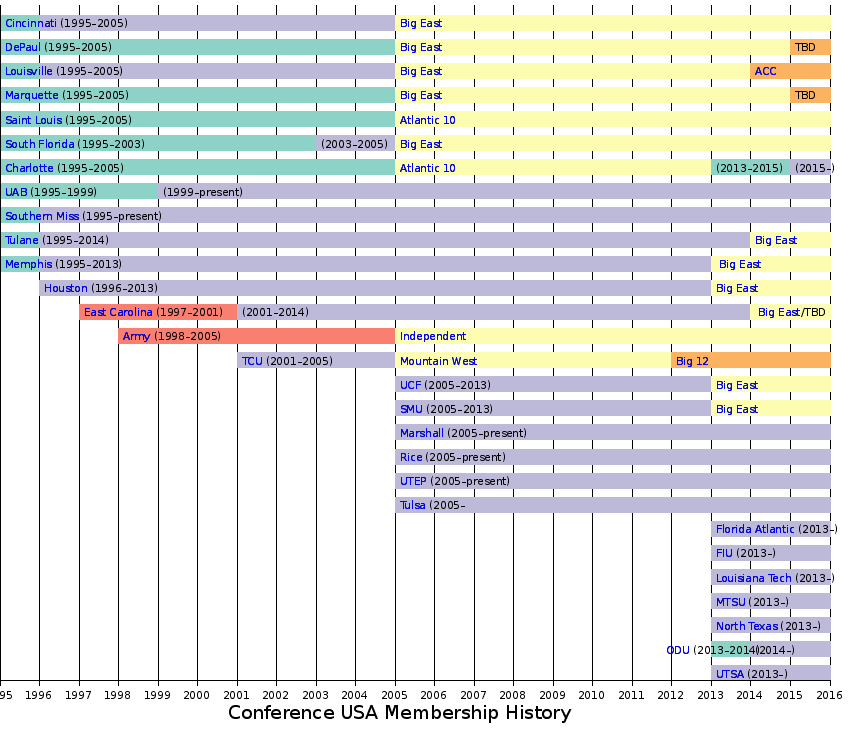 C-USA was founded in 1995 by the merger of the Metro Conference and Great Midwest Conference, two Division I conferences that did not sponsor football. To even out at 12 members (because Dayton, VCU, and Virginia Tech were left out of the merger[13]) the conference invited the University of Houston, but UH could not start C-USA play for a year due to committing to being in the Southwest Conference in its final year. The conference immediately started competition in all sports, except football which started in 1996.

The conference saw radical changes for the 2005–06 academic year. The stage for these changes was set in 2003, when the Atlantic Coast Conference successfully lured Miami and Virginia Tech to make a move from the Big East Conference in 2004. Boston College would later make the same move, joining the ACC in 2005. In response to that series of moves, which depleted the Big East football conference, the Big East looked to Conference USA to attract replacements. Five C-USA members departed for the Big East, including three football-playing schools (Cincinnati, Louisville, and South Florida) and two non-football schools (DePaul and Marquette). Another two schools (Charlotte and Saint Louis) left for the Atlantic 10; TCU joined the Mountain West; and a ninth member, Army, which was C-USA football-only, opted to become an independent in that sport again.

With the loss of these teams, C-USA lured six teams from other conferences: UCF and Marshall from the MAC, as well as Rice, SMU, Tulsa, and later UTEP from the WAC. Note that UCF played in the MAC for football only; for all other sports, it was a member of the Atlantic Sun Conference.

With C-USA's membership now consisting of 12 schools, all of which sponsor football, the conference has adopted a two-division alignment.

In 2013, C-USA will enter its next phase with the departure of four schools for the Big East Conference (Houston, Memphis, SMU, and UCF). This was again the result of Big East schools leaving for the ACC, this time being Syracuse and Pittsburgh. It was announced in early 2012 that Conference USA was in talks with the Mountain West Conference about forming either a football alliance or conference merger in the future.

However, when the conferences discussed their plans with the NCAA, they were told that if they merged, the new league would receive only one automatic bid to NCAA championships; at least one of the former conferences would lose expected future revenues from the NCAA men's basketball tournament; and at least one former conference would lose exit fees from any schools that departed for the new league. As a result, both C-USA and the MWC backed away from a full merger. As of April 2012, the likeliest scenario is an all-sports alliance in which both conferences retain separate identities. (For men's soccer, there is a likelihood that the MWC, SEC, and C-USA along with the one Sun Belt member, that sponsor the sport, will play under the C-USA's men's soccer program. The MWC, which does not sponsor men's soccer, would take three of the four members that offer the sport (UNLV, Air Force, New Mexico—San Diego State, leaving for the Big West in 2013, is a Pac-12 associate member in that sport), join C-USA's three full members that offer the sport (UAB, Marshall, Tulsa), the two SEC members already in C-USA for the sport (Kentucky, South Carolina), and the Sun Belt's Florida International (also in C-USA for the sport).[5])

For the 2013-14 season C-USA invited five new members to join their conference, with all accepting. UTSA and Louisiana Tech will join from the WAC. North Texas will join from the Sun Belt. Old Dominion, which already houses five of its sports in C-USA, will move the rest of its athletic program from the CAA (except for field hockey and wrestling, which are respectively joining the Big East and MAC because C-USA does not sponsor those sports) and upgrade its football program from the Football Championship Subdivision. Charlotte will return from the A-10 and accelerate its recently established football program set to begin play in 2013 as an FCS school to FBS in 2015 with full conference rights in 2016. Also Florida International, another Sun Belt member that joined C-USA for men's soccer in 2005, will become a full all-sports member in 2013.

On November 27, 2012, it was announced that Tulane would leave the conference to join the Big East in all sports and East Carolina would join the Big East for football only. Conference USA responded by adding Middle Tennessee State and Florida Atlantic, both from the Sun Belt.

Conference USA has the following bowl tie-ins for the 2013 season:[16]

The C-USA champion will receive an automatic berth in one of the five Bowl Championship Series (BCS) bowl games if they are the highest ranked non-automatic qualifying conference champion and either of the following:

Any C-USA team ranked in the top 14 of the BCS Rankings and that has at least nine wins is eligible to be selected for an at-large BCS berth by the individual bowl committees.

No team has won an NCAA team championship as a member of C-USA.

However, the following current and future C-USA teams have won NCAA Division I team championships when they were not affiliated with C-USA:

Retrieved from "https://americanfootballdatabase.fandom.com/wiki/Conference_USA?oldid=43095"
Community content is available under CC-BY-SA unless otherwise noted.