The Colonial Athletic Association (CAA) is a NCAA Division I college athletic conference whose full-time members are located in East Coast states from Massachusetts to Georgia. Most of its members are public universities, with four in Virginia alone, and the conference is headquartered in Richmond. The CAA was historically a Southern conference until the addition of five Northeastern schools (all five from rival conference America East) after the turn of the 21st century, which added balance to the conference.

The CAA was founded in 1979 as the ECAC South basketball league. It was renamed the Colonial Athletic Association in 1985 when it added championships in other sports (although a number of members maintain ECAC affiliation in some sports). As of 2006, it organizes championships in 21 men's and women's sports. The addition of Northeastern University in 2005 gave the conference the NCAA minimum of six football programs needed to sponsor football. For the 2007 football season, all of the Atlantic 10 Conference's football programs joined the CAA football conference, as agreed upon in May 2005.

On the playing field, the CAA has produced 16 national team champions in five different sports (the most recent being the Villanova Wildcats who won the 2009 Division I FCS football championship), 33 individual national champions, 11 national coaches of the year, 11 national players of the year and 12 Honda Award winners. In 2006, George Mason became the first CAA team to reach the Final Four. In 2011, the VCU Rams became the second CAA team to reach the Final Four, as well as the first team to win five games en route, due to their participation in the First Four round. 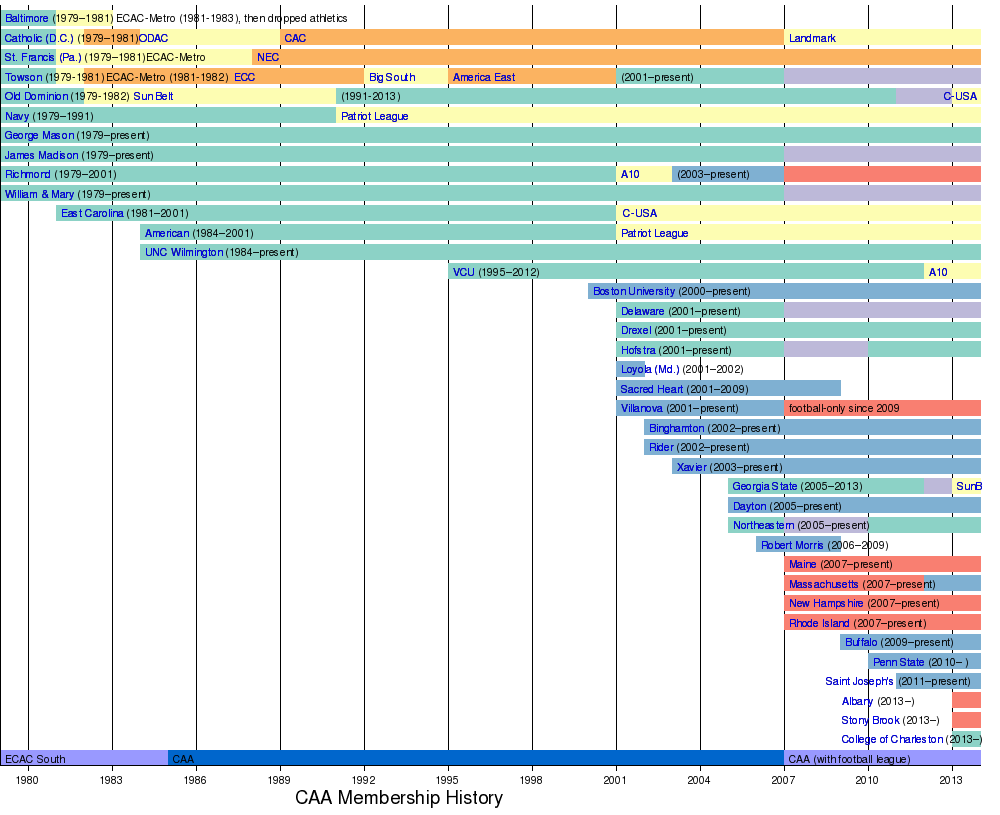 History of the Tournament Final

‡Former member of the CAA

History of the Tournament Finals

Women's Tournament Championships and appearances in CAA Finals by School

‡Former member of the CAA

In the opening weekend of the 2009 season, CAA teams defeated three Division I FBS teams. William & Mary and Richmond took down teams from the ACC (one of the six conferences whose champions receive automatic Bowl Championship Series berths), respectively Virginia and Duke, while Villanova defeated Temple from the MAC. The following weekend saw New Hampshire defeat another MAC team, Ball State (which had gone through the previous regular season unbeaten, but ended 2009 2–10). All four of the CAA teams to defeat FBS teams qualified for the 2009 FCS playoffs and won their first-round games; Villanova and William & Mary reached the semifinals, and Villanova won the FCS championship.

Northeastern—the school whose 2005 move to the CAA enabled the creation of the CAA football conference—dropped football after the 2009 season. President Joseph E. Aoun and the board of trustees endorsed the move after an extensive, two-year review of the athletic program by its director, Peter Roby. The decision to eliminate football followed six straight losing seasons and sparse game attendance at a school whose ice rink often sells out for hockey.[15]

On December 3, 2009, Hofstra announced that the university would no longer be sponsoring football. The decision follows a two-year review of sports spending at Hofstra. School officials stated there are no plans to cut any other sports at the Long Island school. Hofstra cited costs and low student interest—only 500 students would attend home games despite free tickets—as reasons to drop the program.[16] Due to the reduction of the conference, the CAA did not use the division format for the 2010 season. Even though Old Dominion began conference play in 2011 and Georgia State will do the same in 2012, the divisional format is not likely to return in the immediate future, as the CAA will lose football members in both 2012 and 2013. UMass will depart for FBS and the Mid-American Conference in 2012 followed by Georgia State's departure for the Sun Belt and Old Dominion for Conference USA.

The 2010 season started with the biggest non-conference win of the CAA's short history, when James Madison defeated nationally-ranked Virginia Tech (FBS #13 at the time) of the ACC. JMU won 21-16 on September 11, at Virginia Tech's Lane Stadium.

The CAA football conference has the following members:

The former members of the CAA football conference are:

On August 7, 2012 CAA Football announced that Albany and Stony Brook would be joining the football conference in 2013. Both will be full members of CAA Football but will not be joining the Colonial Athletic Association for other sports which will remain in the America East Conference for both schools.