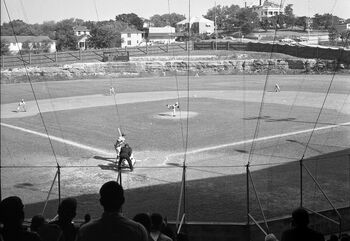 Clark Field in Austin, TX. Clark Field was the home of the University of Texas baseball team from 1928-1974. It's most distinctive feature is "Billy Goat Hill", the 12-ft limestone cliff in play across the outfield. It also hosted various exhibition games over the years, including a game in which Lou Gehrig reportedly hit a 600+ foot home run in 1929. The ball reportedly cleared the fence in right-center field, went over the street where the white car is parked, and landed in the grass in front of the big white house at the top of the picture.