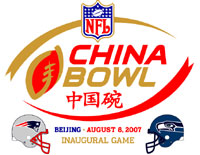 The China Bowl was the name of a proposed National Football League (NFL) pre-season exhibition game that had been scheduled to take place in August 2007, but later postponed to 2009 and ultimately canceled, between the New England Patriots and the Seattle Seahawks at the National Stadium in Beijing. [1]

The originally scheduled China Bowl was to be played at Workers Stadium in Beijing, China, on August 8, 2007. The game was to kick-off the one-year countdown before the 2008 Summer Olympics in Beijing, and would have been the first NFL-sanctioned game to take place in China,[2] as well as the first NFL preseason game played outside the United States since the league abandoned the American Bowl series in 2005 (game 1 of the Bills Toronto Series now holds that honor).

On April 2, 2007, the NFL announced the rescheduling of the preseason game in Beijing to August 2009, so that more focus can be placed on the start of the International Series, the first regular season game to take place outside of North America, which took place at Wembley Stadium, London that October.[3][4] Both teams have expressed interest in still playing the game, and the Patriots, having operations in China, would have been an opponent either way.

As a result of the recent recession, the Patriots closed their China base, and the game was not played.[5] The Patriots were instead assigned to the next game in the International Series, against the Tampa Bay Buccaneers, which was played at Wembley on October 25, 2009.

Retrieved from "https://americanfootballdatabase.fandom.com/wiki/China_Bowl?oldid=30483"
Community content is available under CC-BY-SA unless otherwise noted.