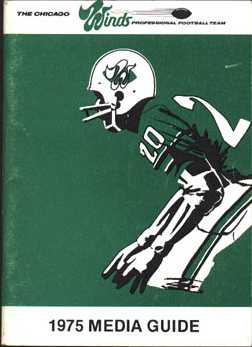 The Chicago Winds was the World Football League's ill-fated 1975 successor to the Chicago Fire. The team was named the Winds (plural, not singular) because Chicago was nicknamed "The Windy City." The Winds played at Soldier Field and was assigned to the WFL's Western Division for 1975 (the WFL having shrunk from 12 teams to 11, and from three divisions to two).

Prior to the 1975 season opener, Winds owner Eugene Pullano attempted to sign New York Jets star quarterback Joe Namath to a contract. Namath, who had helped establish the Jets and the old American Football League, was wavering about re-signing with New York after the 1974 season. Reports had him retiring, being traded to another NFL team — or jumping to the WFL, perhaps as a player/coach/co-owner. Namath's agent Jimmy Walsh asked the Winds for a $500,000 signing bonus, a three-year contract worth $500,000 a year, a $2 million annuity ($100,000 per year for twenty years) and even terms for Namath's eventual ownership of a WFL franchise in New York. (The Winds even changed their colours to green and white, the same as the Jets.) According to Mark Kreigel's biography, Namath, Chicago apparently accepted these terms — until Walsh also demanded 15 percent of the WFL's total TV package. The deal was off, and Namath stayed with the Jets.

The team did, however, hire former Charlotte Hornets pilot Babe Parilli as its head coach and general manager. A number of old Fire players returned as well, including running backs Mark Kellar and Cyril Pinder, center Guy Murdock (the Fire's MVP), and receivers Steve Wright and Chuck Kogut. With Namath out of the picture, the Winds acquired veteran quarterback Pete Beathard from the Portland Storm, while wide receiver John Gilliam, originally signed with The Hawaiians, also came to Chicago.

The Winds did not have much success of the field or at the box office. They lost both pre-season games, to Jacksonville and Charlotte (Parilli's old team). Unlike the defunct Chicago Fire, which sold 15,000 season tickets in 1974, the Winds managed only 1,600. In late July, the league took swift action by firing Parilli and replacing him with Abe Gibron, who had been fired from the Chicago Bears after the 1974 season. (An amusing typo in a New York Times story indicated Gibron had become coach of the Chicago Winos.) A very reluctant Leo Cahill left a (relatively) comfortable position as Memphis Southmen GM to the precarious situation with the wobbling Winds. Gibron only had 48 hours or so to learn about his new team.

The Winds lost their first two regular-season contests, 10-0 in Birmingham and 38-18 in Shreveport, before beating the Portland Thunder, 25-18 in overtime, in front of just 3,501 fans at Soldier Field. After two more road losses (at Hawaii and Memphis), the team was 1-4 and swimming in red ink. Two major investors withdrew their $175,000 deposit in order to keep the team solvent. (In a Sports Illustrated story on the death of the WFL, a Winds official referred to the investors as "Bob and Rich from California. I don't know their last names, but one's an Arab and the other's a Greek.") The September 6th game at Soldier Field against the Southern California Sun was cancelled, and the Winds had died down.

The WFL voted 10-1 to remove Chicago from the schedule, with only the Winds themselves voting to continue. A team folding in mid-season was not unusual for the WFL (the Jacksonville Sharks and Detroit Wheels had died 14 games into a 20-game regular season in 1974), so the league was prepared. Since there were 11 teams, one team had a bye each week; with Chicago out, the bye team simply took the Winds' place in the schedule. Meanwhile, John Gilliam was selected by the Philadelphia Bell in a dispersal draft, but returned to the NFL Minnesota Vikings instead, much to the WFL's chagrin. Even this arrangement didn't last too long, as the entire WFL collapsed at the end of October 1975.

Retrieved from "https://americanfootballdatabase.fandom.com/wiki/Chicago_Winds?oldid=34452"
Community content is available under CC-BY-SA unless otherwise noted.