Start a Wiki
This article is about the modern "Can-Am League". For the original "Can-Am League", which operated between 1936 and 1951, see Canadian–American League.

The Canadian American Association of Professional Baseball, commonly known as the Can-Am League, is a professional, independent baseball league with teams in the Northeast United States and Eastern Canada, founded in 2005 as a reorganization of its predecessor, the Northeast League. The Can-Am League operates in cities not directly served by Major or Minor League teams and is not affiliated with either. The league office is in Durham, North Carolina. Though a separate entity, the league shares a commissioner, president, and director of umpires with the American Association of Independent Professional Baseball.

The Allentown Ambassadors folded days before the 2004 season began, forcing the Northeast League to field a traveling team called the Aces. For the 2005 season, the Northeast League accepted the Worcester Tornadoes as a new eighth team. However, three weeks before the start of the 2005 season, the Bangor Lumberjacks folded, forcing the team to create another traveling team, this time called The Grays.

The league has operated a traveling team whenever necessary to provide an even number of teams. However, doing so forces the other franchises to host more home games to provide a season of the same length. To obviate such disruptive last-minute schedule changes in the future, the Northeast League adopted a new charter, giving the league new powers to ensure that its franchises are solvent, and renamed itself the Canadian-American Association.

For 2006, the Can-Am League added two teams. The new Sussex Skyhawks replaced the Elmira Pioneers, which moved into the amateur New York Collegiate Baseball League; and the Nashua Pride joined the league from the Atlantic League. There were now eight teams without a traveling team.

For 2007, the Atlantic City Surf joined from the Atlantic League, and the league re-established The Grays, after a year of dormancy, as a tenth team. At the end of that season, both the New Haven County Cutters and the North Shore Spirit suspended operations, reducing the league to eight teams. Many New Haven player contracts were sold to Nashua, while many Spirit players were placed on waivers.

For 2008, Ottawa, which had lost its franchise in the International League, joined the Can-Am League as the Rapidz, an eighth franchise, displacing the Grays.

After the 2008 season, Rapidz management declared bankruptcy. The league declared its intention to operate the Ottawa franchise in 2009. The league changed the team's name back to Rapids, a spelling used during the team's founding (Rapides in French).[1] Later, however, the Commissioner stated the need for a "fresh start" and opened a contest to select a new name for the team.[2] The winning name was "Voyageurs".

Still later, the Atlantic City franchise was terminated, as a sale fell through. On March 30, 2009, the league announced that it would shrink to six teams rather than having two league-operated teams.[3]

The Nashua Pride franchise was sold and was known in 2009 as the American Defenders of New Hampshire because of the military tie-ins of its new ownership group. During the 2009 season the Defenders were locked out of Holman Stadium and forced to play their last home games on the road, bringing doubt to the future of baseball in Nashua. The Quebec Capitales would go on to win their second League Championship.

On December 19, 2009, league directors preliminarily gave approval to transfer the membership of the American Defenders of New Hampshire from Nashua, New Hampshire, to Pittsfield, Massachusetts for play in the 2010 season. Final approval was granted by the city for use of Wahconah Park on February 1.[4] The ownership group headed by Buddy Lewis had a lease on Wahconah Park for a team in the New England Collegiate Baseball League, and transferred the current lease for play in the Can-Am League. Dan Duquette, current Executive Vice-President of Baseball Operations for the Baltimore Orioles, is also part of the ownership group, which is known as Boston Baseball All-Stars LLC.[5] The team was renamed the Pittsfield Colonials.

After the 2010 season the Sussex franchise was folded after its ownership group decided to focus its resources on the New Jersey Jackals, their primary team, and could not find a buyer. In its place, the league awarded the Rockland Boulders a franchise, added the Newark Bears from the Atlantic League, and formed the New York Federals as a traveling team. Pittsfield's franchise charter was rescinded after the 2011 season and the Colonials folded after ownership could not find partners.

The Brockton Rox moved to the Futures Collegiate Baseball League after the 2011 season. At the end of the 2012 season the Worcester charter was rescinded and the league decided to try to find new owners for the Tornadoes, but failed to do so and awarded the franchise instead to a Trois-Rivières, Quebec, group.

Beginning in 2012, Can-Am League clubs played 18 to 20 games per season against opponents from the American Association of Independent Professional Baseball, with which it shares a commissioner. After the 2013 season, Newark announced it would not compete in the 2014 season and the team was eventually folded altogether.

In 2014, the Can-Am League announced that a fifth team, based in Ottawa, would join the league for 2015. The league later announced it would be returning to Sussex County, New Jersey as well, and announced that a traveling team would join the Ottawa Champions and the Sussex County Miners to create a balanced schedule, and continued to include matchups with the American Association. Interleague play ended after the 2015 season, though the Can-Am League continues to send players to the American Association's All-Star Game.

In its inaugural season, the Can-Am League kept the two-division setup and half-season format that the Northeast League had. The two teams that were leading their respective divisions, designated North and South, at the end of the first half of the season automatically qualified for the playoffs. Two additional playoff spots would be made available. Once again, these went to division winners if the first half champions failed to repeat. Otherwise, one or more wild card spots would be given based on the team's overall record in both halves. If absolutely necessary, a one-game playoff would be played in case of a tie.

Beginning in 2006, the league abandoned divisional play. The first half-season leader automatically qualified for the playoffs, as did the second half-season leader if there was a second. To round the field out at four, two or more wild-card spots were given to teams with the best overall season record.

The four qualifiers for the playoffs would meet in two separate best of five series with the winners advancing to the League Championship Series, which was also best of five.

Beginning in 2012, the league stopped using the half-season format. From 2012 through 2014, the teams with the two best records in the league advanced to the League Championship Series. The series was expanded from a best of five to a best of seven. This changed in 2015 when Ottawa and Sussex County joined the league, which enabled it to have enough teams to return to its previous playoff format. The league now awards playoff spots to the teams with the four best records at the end of the regular season.

A league salary cap is a maximum amount that can be spent on the entire player roster. Teams may apportion it among players as they see fit. Certain players are given coaching duties, by which to earn additional pay. The maximum salary cap for a rostered player is about US$4,000 every one to two months, depending on the roster size. However most players make about $2–3,000 every month. There are some rostered players that make the max every two months. There are no players in the league that make more than $4,000 per month. Rosters are limited to 22 players once the regular season begins. An additional two players can be on the disabled list (which is referred to on some published rosters as the disabled/inactive list, and is sometimes used to ensure that a player under contract that a team does not wish to use is unavailable to opponents).

League roster rules give each player an LS (Length of Service) rating, based on the number of full years the player has played professionally: Rookie, LS-1 through LS-5, and Veteran. Teams can carry at most four veterans and must carry at least five rookies. Some published rosters state the LS rating of each player.[7]

Opponents play a series of from three to five games on consecutive days. There are no doubleheaders in the original schedule, but doubleheaders are played after weather postpones or suspends a game. Occasionally, for clubs near to one another, the original schedule does not put all the games of a series at the same ballpark. For example, the teams may travel to the visitors' ballpark for the middle game of a series.

In 2014, the Can-Am League adopted the IBAF's international tiebreaker rule. If a game goes beyond the tenth inning, each half-inning begins with a runner on second base. The runner is the batter who made the last out in the team's previous turn at bat, or the batter immediately preceding the leadoff man for the inning if that player has been substituted out. Play continues as normal otherwise. If the game remains tied, the process repeats until one team wins. The first use of the rule came on June 2, 2014, in an interleague matchup between the St. Paul Saints and the Quebec Capitales, and the American Association has also adopted the rule. 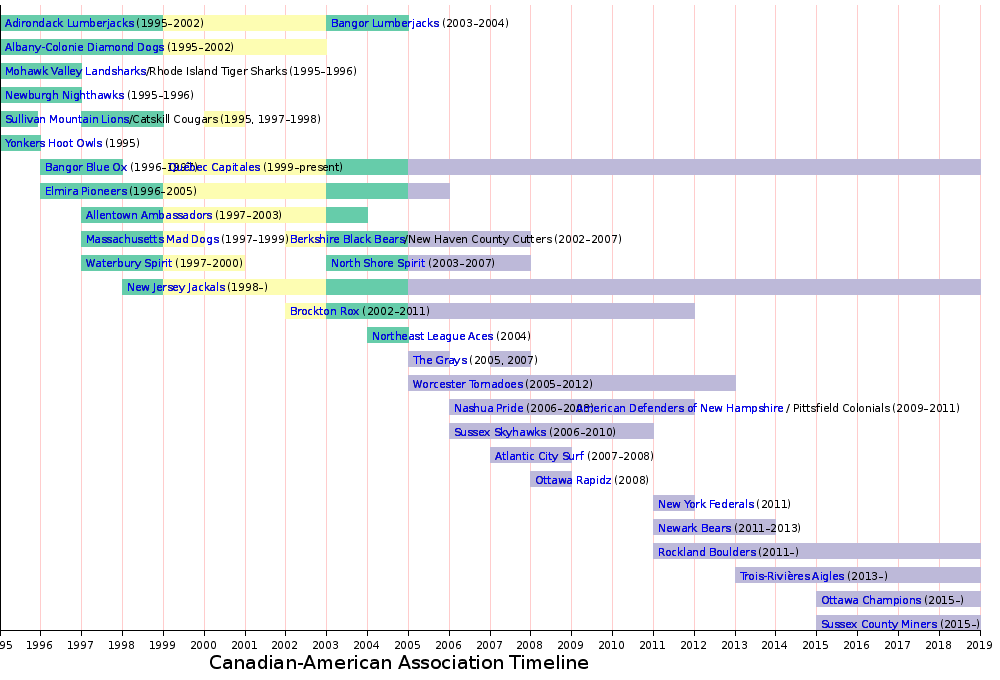 Retrieved from "https://americanfootballdatabase.fandom.com/wiki/Canadian_American_Association_of_Professional_Baseball?oldid=202094"
Community content is available under CC-BY-SA unless otherwise noted.