View source
watch 01:36
We're Getting Mutants in the MCU - The Loop
Do you like this video?
Play Sound
This article is about an American college sports organization. For the Japanese advertising agency, see Big West Advertising.

Four of these charter members (Cal State Los Angeles, Fresno State, Long Beach State, and San Diego State) had previously been members of the nation's premier Division II conference, the California Collegiate Athletic Association (CCAA). After capturing multiple national championships, the members sought a higher level of play, which could be found within the university ranks. Charter football member Pacific and charter all-sports members San Jose State and UC Santa Barbara had also been CCAA members in the past, but had moved to the West Coast Athletic Conference (now West Coast Conference) before joining the PCAA.

The seven schools formally met in May 1969 and finalized the creation of the PCAA less than two months later.

Since its inception as the Pacific Coast Athletic Association, the conference has seen many changes throughout the years. Utah State was the first institution outside of California to join the conference in 1978. This opened the floodgates for many other schools to affiliate with the PCAA; notable schools include UNLV, Nevada, Louisiana Tech, and Boise State, among others.

In 1983, the PCAA became the first western conference to introduce women's athletic programs, giving the opportunity for all its members to have their women student-athletes compete at the same level as their male counterparts. This proved vital for Hawaiʻi as their only participation in the conference was for their women's sports.

However, turnover of universities started to take its toll. Many left to join conferences that were perceived as more well-known, such as the Western Athletic Conference or the Mountain West Conference, while others did not see the benefit of travel since historically many of the teams have been California-based. From the departures of Idaho and Utah State in 2005 until the arrival of Hawaiʻi in 2012, all members were based in California, reducing both the cost and travel time between the universities. When Hawaiʻi joined, it agreed to help defray a portion of travel costs to that state for the league's California members. Between full and associate members, there have been no fewer than 25 members in the conference's history, while only three of the original seven charter members remain (Long Beach State, Pacific, and UC Santa Barbara; in 2013, Pacific will leave).

The change to the Big West

To mark its 20th year as an athletic conference, in 1988 the Pacific Coast Athletic Association decided to change its name to the Big West Conference. The move signaled the changing landscape within the conference. With such schools as Utah State, UNLV, Nevada, New Mexico State, and Hawaii now in the fold, the name change was more representative of the population. In addition, the conference had signed a contract with ESPN to have its men's basketball games telecast as the third game of a triple header known as "Big Monday" - the other conferences being featured were the Big East and the Big 12 so the name Big West fit the "big" theme. Despite the eventual departure of all non-California based teams, the widely-known "Big West Conference" name has remained constant.

Many of the former members of the Big West are now members of either the Western Athletic Conference or the Mountain West Conference. Of the nine schools that were in the WAC before the 2010–12 conference realignment, only Hawaii has not spent some time in the Big West as a football participant – it was a Big West member only in women's sports. Of all the former members, Cal State Los Angeles is the only team that reverted to Division II level.

School names and nicknames reflect those used by the institutions when they were Big West members. One school has changed its name (Southwestern Louisiana, now Louisiana–Lafayette) and one its nickname (Arkansas State, from Indians to Red Wolves). 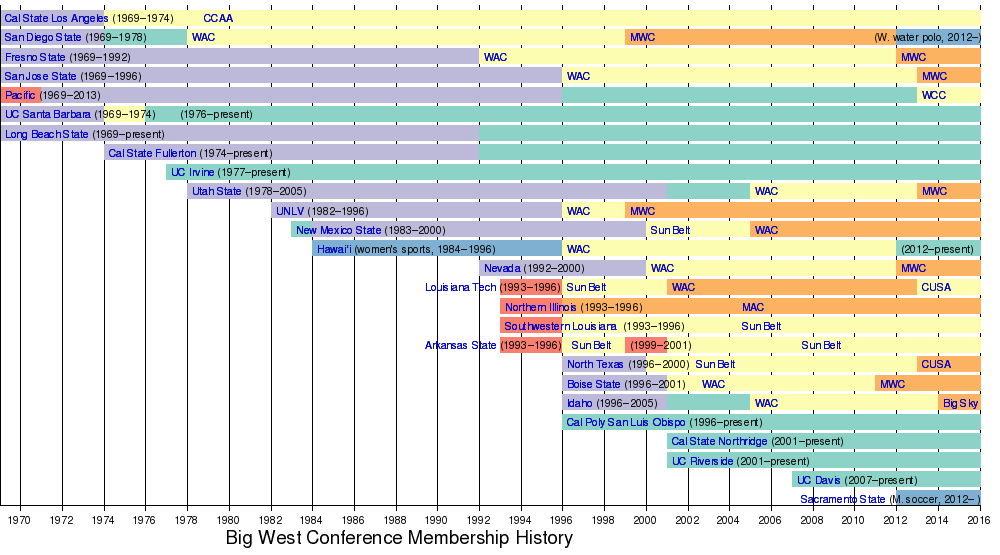 When UNLV won the school's lone Division I Basketball Championship in 1990, by beating Duke University by a record setting margin of 30 points in the 103-73 victory, they were a member of the Big West Conference.

The current members of the Big West have won a total of nine NCAA national championships including UC Santa Barbara’s most recent Men’s Soccer Championship in 2006.

The most recent winner of the Big West Conference Tournament is Long Beach State (2012), who won the tournament as the number 1 seed. .[7]