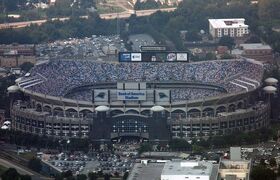 Bank of America Stadium (formerly known as Carolinas Stadium and Ericsson Stadium) is a 73,778-seat football stadium located on 33 acres (13 ha) of land in uptown Charlotte, North Carolina, USA. It is the home facility of the Carolina Panthers NFL franchise.[1] It also hosts the annual Meineke Car Care Bowl which features teams from the Atlantic Coast Conference and the Big East.[2] It will host the 2010 and 2011 ACC Championship Games.[3] The stadium has also been the site for several games featuring the East Carolina University Pirates.[4][5]

Other sites considered for selection Edit

The organization had considered several possible sites for the stadium's location before choosing the Charlotte center city site. Part of the site was occupied by the historic Good Samaritan Hospital.

One alternative was near NASCAR's Charlotte Motor Speedway and the University of North Carolina at Charlotte in northeast Mecklenburg County. Another was at the intersection of I-85 and US-74 in western Gaston County. A popular option was to locate the facility near Carowinds amusement park, with the 50 yard line being on the state border of North Carolina and South Carolina.

Bank of America stadium does not serve as the primary home stadium for any college football team. However, it has hosted several college football games. The late-December Meineke Car Care Bowl has been held in the stadium annually since 2002. The ACC Championship Game was held in the stadium for the 2010 season and is scheduled to be held there again in 2011. The stadium has also hosted four East Carolina Pirates football games, two versus the NC State Wolfpack (in 1996 and 2004), a 1999 game versus the West Virginia Mountaineers and a 2008 game against the Virginia Tech Hokies. The stadium will also host two games between East Carolina and the South Carolina Gamecocks, in 2011 and 2014.

At the time of its construction in the early 1990s, the stadium was a pioneering project for the use of Personal Seat Licenses. It was the first large-scale project funded in the United States chiefly through securing PSLs. The strength of PSL pledges impressed NFL owners and resulted in the Carolinas receiving the first new expansion team in nearly two decades.

The stadium is also credited with being a major cause for the recent round of new stadium construction in the NFL. Only a decade after its construction, it is now the eleventh oldest among current NFL stadiums. However, the stadium was considered so far ahead of its time that no significant renovations have been made since it opened. There are only four older NFL stadiums which have not received major renovations (the Edward Jones Dome, Louisiana Superdome, and Arrowhead Stadium are now undergoing renovations, and Giants Stadium and Texas Stadium are now demolished.). The last four to open before the stadium broke ground were Candlestick Park in 1972, Ralph Wilson Stadium in 1973, Sun Life Stadium in 1987, and the Georgia Dome in 1992.

Since Bank of America Stadium opened in 1996, twenty-one other teams have moved into new facilities, an average of 1.9 new facilities opening each year.

The most recent addition came in 2007, when the original scoreboards and replay screens were replaced with high-definition monitors and ribbon boards.

Though Bank of America Stadium is mostly used as a football facility, it has hosted events of all kinds throughout its history.

Retrieved from "https://americanfootballdatabase.fandom.com/wiki/Bank_of_America_Stadium?oldid=14044"
Community content is available under CC-BY-SA unless otherwise noted.