The American Hockey League (AHL) is a 30-team professional ice hockey league based in the United States and Canada that serves as the primary developmental circuit for the National Hockey League (NHL).[2] Since the 2010–11 season, every team in the league had an affiliation agreement with an NHL team; in the past, one or two NHL teams would not have an AHL affiliate and so assigned players to AHL teams affiliated with other NHL teams. Twenty-six AHL teams are located in the United States and the remaining four are in Canada. The league offices are located in Springfield, Massachusetts, and its current president is David Andrews.

The annual playoff champion is awarded the Calder Cup, named for Frank Calder, the first President (1917–1943) of the NHL. The current champions are the Norfolk Admirals.

The AHL traces its origins directly to two predecessor professional leagues: the Canadian-American Hockey League (the "Can-Am" League), founded in 1926, and the first International Hockey League, established in 1929. Although the Can-Am League never operated with more than six teams, after the 1935–36 season it reduced down to just four member clubs – Springfield, Philadelphia, Providence, and New Haven – for the first time in its history. At the same time, the then-rival International Hockey League lost half of its eight members after the 1935–36 season, also leaving it with just four member teams: Buffalo, Syracuse, Pittsburgh, and Cleveland.

With both leagues down to the barest minimum in membership needed to operate, the governors of each recognized the necessity to take proactive steps to assure the long-term survival of their member clubs. To that end they all decided the logical solution to their common problem was for the two leagues to play an interlocking schedule with each other. Styled as the International-American Hockey League, the two older leagues' eight surviving clubs thus began joint play in November 1936, as a new two-division "circuit of mutual convenience" with the four Can-Am teams constituting the I-AHL East Division and the IHL's quartet playing as the West Division. In addition, the IHL also contributed its former championship trophy, the F. G. "Teddy" Oke Trophy, which would be awarded to the regular season winners of the West Division in the new I-AHL until 1952 (the Oke Trophy is now awarded to the regular-season winners of the AHL's current seven-team East Division).

A little more than a month into that first season, however, the balance and symmetry of the new combined circuit suffered an early setback when its membership unexpectedly fell to seven teams. The West's Buffalo Bisons were forced to cease operations on December 6, 1936, after playing just 11 games, because of what proved to be insurmountable financial problems and lack of access to a suitable arena; the Bisons' original arena, Peace Bridge Arena, had collapsed the previous season. The makeshift new I-AHL thus played out the rest of its first season (as well as all of the next) with just seven teams.

After two seasons of interlocking play, the governors of the two leagues' seven active teams met in New York City on June 28, 1938, and agreed that it was time to formally consolidate. Maurice Podoloff of New Haven, the former head of the Can-Am League, was elected the I-AHL's first president. The former IHL president, John Chick of Windsor, Ontario, became vice-president in charge of officials.

The new I-AHL also added an eighth franchise at the 1938 meeting to fill the void in its membership left by the loss of Buffalo two years earlier with the admission of the then two-time defending EAHL champion Hershey Bears.[3] The Bears remain the only one of these eight original I-AHL/AHL franchises to have been represented in the league without interruption since the 1938–39 season. The newly merged circuit also increased its regular-season schedule for each team by six games from 48 to 54.

After the 1939-40 season, the I-AHL renamed itself the American Hockey League. It generally enjoyed both consistent success on the ice and relative financial stability over its first three decades of operation. In the late 1960s and early 1970s, however, the cost of doing business in professional ice hockey began to rise sharply with NHL expansion and relocation (a process which involved the placing of teams in Pittsburgh, Cleveland, and Buffalo, forcing long-time AHL clubs in those cities to fold) and especially the 1972 formation of the twelve-team World Hockey Association (WHA). With these events, the number of major-league teams competing for players rose from six to thirty in just seven years. Player salaries at all levels shot up dramatically with the increased demand and competition for their services.

To help compensate for this increased expense, many NHL clubs cut back on the number of players they kept under contract for development, and players under AHL contracts could now also demand much higher paychecks to remain with their clubs. As a result, within a period of just three years from 1974 to 1977, half of the AHL's teams folded, paring the league down to just six teams from twelve. Making the AHL's situation even bleaker as the 1977–78 season approached was news that the Providence Reds – the last surviving uninterrupted franchise from 1936–37 – had decided to cease operations.

The AHL appeared in serious danger of folding altogether if this dangerous downward trend was not reversed. As these clouds appeared their darkest, however, two events in the fall of 1977 helped reverse the trend and started the league back on the path to the great health it enjoys today. The first of these was the decision of the NHL's Philadelphia Flyers to return to the league as a team owner, and the second was the unexpected collapse of the North American Hockey League just weeks before the start of the 1977–78 season.

The Flyers' new AHL franchise became the immediately successful Maine Mariners, which brought the new AHL city of Portland, Maine both the regular-season and Calder Cup playoff titles in each of that club's first two seasons of operation. The folding of the NAHL, meanwhile, suddenly left two of its member cities which wanted to continue to operate teams, Philadelphia and Binghamton, without a league to play in. Binghamton solved its problem by acquiring and moving the Providence Reds franchise and joined the league as the Binghamton Dusters (a.k.a. Broome Dusters), while the Philadelphia Firebirds crossed over to the AHL from the NAHL. The Dusters and Firebirds, together with the Hampton Gulls (who had joined the league from the Southern Hockey League), boosted the AHL to nine member clubs as the 1977–78 season opened. Hampton folded on February 10, 1978, but was replaced the next year by the New Brunswick Hawks. The league continued to grow steadily over the years, reaching 20 clubs by the 2000–01 season.

Absorption of the IHL[edit | edit source]

In 2001–02, the AHL's membership jumped dramatically to 27 teams, mostly by the absorption of teams in six cities – Milwaukee, Chicago, Houston, Salt Lake City (as Utah), Winnipeg (as Manitoba), and Grand Rapids – from the International Hockey League when that longtime rival circuit folded after fifty-six seasons of operation (1945–2001). The Utah Grizzlies suspended operations after the 2004–05 season (the franchise was sold in 2006 and returned to the ice in Cleveland in 2007 as the Lake Erie Monsters). The Chicago Wolves (2002, 2008), Houston Aeros (2003), and Milwaukee Admirals (2004) have all won Calder Cup titles since joining the AHL from the IHL. Chicago and Milwaukee have also made multiple trips to the Calder Cup Finals, and Houston made their second Finals appearance in 2011. The Manitoba Moose moved to St. John's, Newfoundland and Labrador in 2011 and were renamed the St. John's IceCaps after the NHL's Atlanta Thrashers moved to Winnipeg as the second incarnation of the Winnipeg Jets. One oddity caused by the AHL's 2001 expansion is that the league now has two teams with the same nickname: the Milwaukee Admirals and the Norfolk Admirals. The latter team transferred to the league from the mid-level ECHL in 2000. 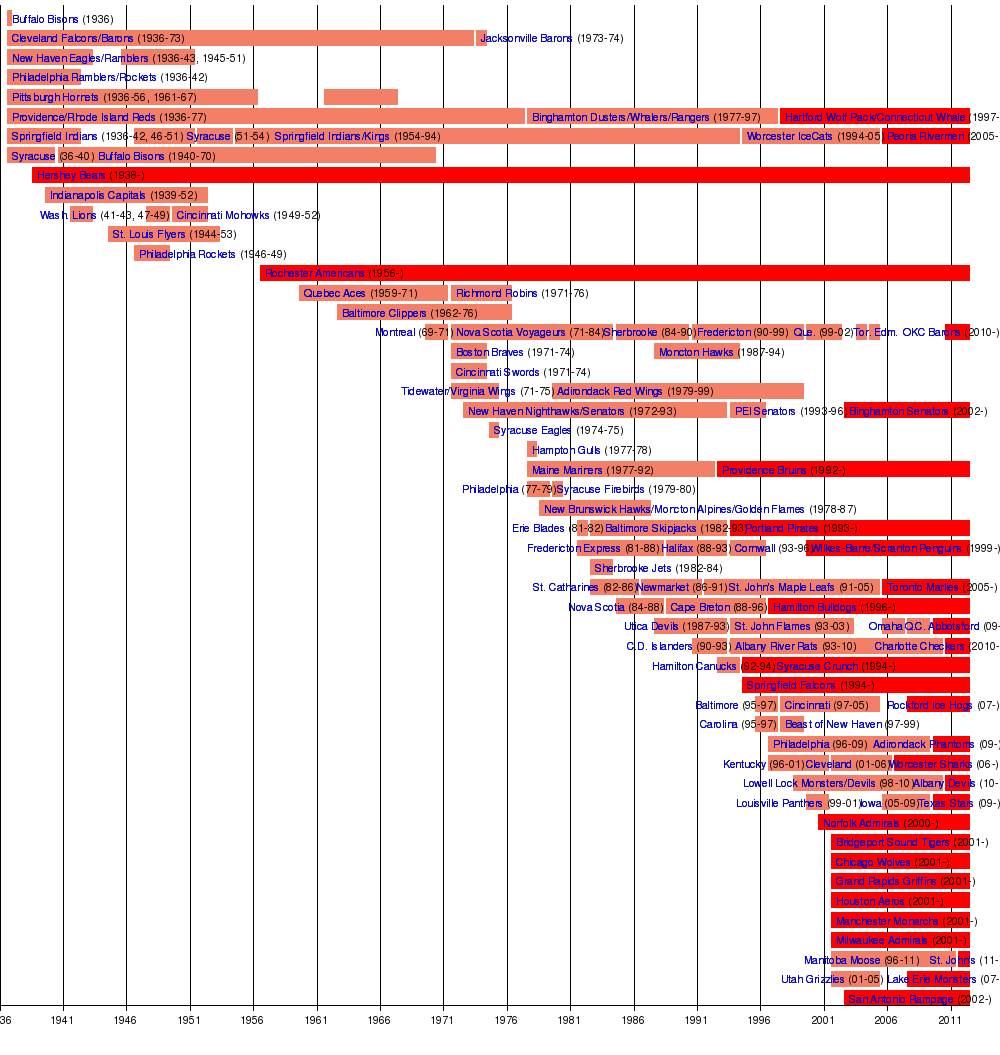 The American Hockey League first held an All-Star Game in the 1941–42 season. The event was not played again until the 1954–55 season, and was then held annually until the 1959–60 season. In the 1994–95 season, the AHL revived the events again, and has been played every season since. The skills competition was first introduced for the 1995–96 season. The PlanetUSA team is made up of players born outside of Canada and the Canada team is made up of players born within Canada.

While a tradition of outdoor games in the AHL began in 2010, contrary to the NHL's Winter Classic none of these games have technically been league events. The Syracuse Crunch was the first organization to put on an outdoor game in the AHL on Feb. 20, 2010, building a rink at the New York State Fairgrounds in Syracuse, New York, and packing a record 21,508 fans in for the Mirabito Outdoor Classic against the Binghamton Senators. The contest, which was also televised to an international audience on NHL Network, was won by the Crunch, 2-1.

The Connecticut Whale hosted the Whale Bowl -- the AHL's second outdoor game -- on Feb. 19, 2011, as part of a 10-day Whalers Hockey Fest at Rentschler Field in East Hartford, Conn. Attendance for Connecticut's game against the Providence Bruins was announced at 21,673, the largest in AHL history to that point. Providence won, 5-4, in a shootout.

On Jan. 6, 2012, the largest crowd in AHL history saw the Adirondack Phantoms defeat the Hershey Bears, 4-3, in overtime before 45,653 fans at Citizens Bank Park in Philadelphia, Pennsylvania, as the final event of the week-long activities associated with the 2012 NHL Winter Classic, which also included a game between the Philadelphia Flyers and the New York Rangers on Jan. 2 and an alumni game between retired players (including eight honored members of the Hockey Hall of Fame) of those two clubs on Dec. 31, 2011. The contest was the third outdoor game in AHL history and it more than doubled the league's previous single-game attendance mark.

On Jan. 21, 2012, the Steeltown Showdown between Ontario rivals the Toronto Marlies and Hamilton Bulldogs was held at Ivor Wynne Stadium in Hamilton, Ont., with the Marlies winning 7-2 in front of 20,565 fans, the largest crowd ever for an AHL game in Canada. The AHL game was preceded the previous night by a game between Toronto Maple Leafs and Montreal Canadiens alumni.

Two outdoor games have been announced for the 2012-13 AHL season. The Grand Rapids Griffins and Toronto Marlies were scheduled to meet at Comerica Park in Detroit on Dec. 30, 2012, as part of the festivities surrounding the contingent NHL Winter Classic between Detroit and Toronto. However due to the cancellation of the NHL Winter Classic, this game won't take place at Comerica Park. Then on Jan. 20, 2013, the Hershey Bears and Wilkes-Barre/Scranton Penguins will meet outdoors at Hersheypark Stadium in Hershey, Pa.

On January 6, 2006, the league announced the first inductees into the AHL's new Hall of Fame:

The founding members were formally inducted, on February 1, 2006.

The following is a list of awards of the American Hockey League.

Retrieved from "https://americanfootballdatabase.fandom.com/wiki/American_Hockey_League?oldid=61292"
Community content is available under CC-BY-SA unless otherwise noted.