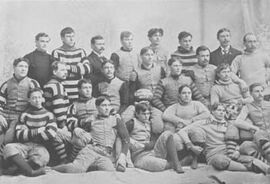 The team outscored opponents by a combined 232–8, including defeating John Heisman's Oberlin Yeomen.[3] The football rivalry against Case began with the first ever match up on Thanksgiving and the first time the game was played at League Park.[4]

Retrieved from "https://americanfootballdatabase.fandom.com/wiki/1894_Western_Reserve_football_team?oldid=222250"
Community content is available under CC-BY-SA unless otherwise noted.